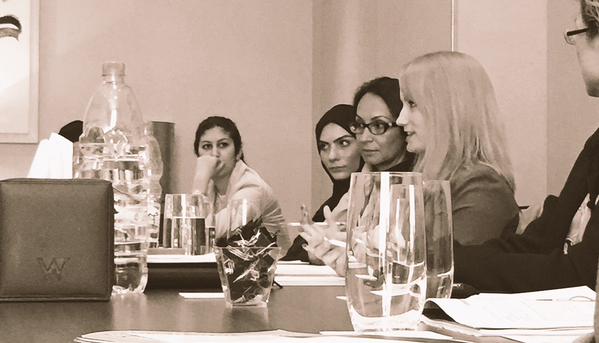 On Wednesday, March 11, 2015,  I spoke at the 5th Gulf Intelligence Doha Energy Forum and Women in Energy Summit. The summit’s organizers approached me because of my experience reporting on Gulf women and women’s issues in the region.

I was a panelist in two breakout sessions. They were: ‘How Will Correcting the Gender Imbalance Change the Energy Industry?’ and ‘PR/Communications: (The Only?) Entry Point for Women to High-Level Corporate Positions in the Oil Industry.’

It was a lively summit, and my good friend Kamahl Santamaria, the host of Al Jazeera’s Counting the Cost program, even filmed a Q&A segment with some of the featured guests. It will air later this weekend (I’m not in it, but Kamahl did ask one of the questions I suggested to him via Twitter).

Kamahl took the above picture of me as I was speaking during a breakout session. So thank you, Kamahl!

Check out our tweets from the summit. We debated the effectiveness of quotas for women in the oil & gas sector, and lots more!