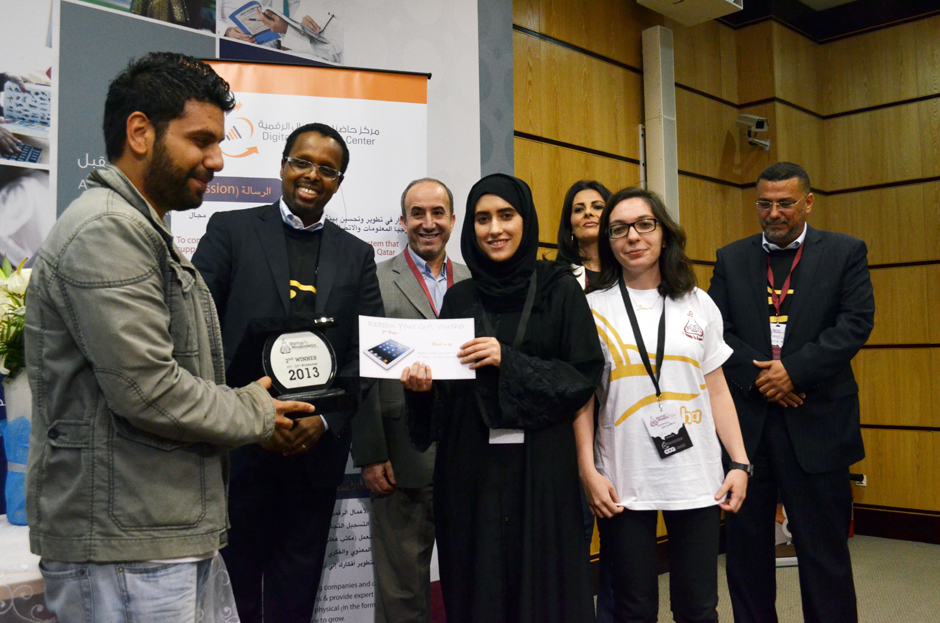 Called Raqam, the app lets users track the frequency of any activity imaginable – from drinking juice to reading a novel. The app creates charts so the user can determine whether their activity follows a particular trend. For instance, users can see whether they tend to spend more money at the beginning or end of the month, or whether their exercise routine peters off at specific points during the week.

The app offers the “power to quantify every aspect of your life,” said Mufeed Ahmed, 28, who presented the product to judges. The team also included Fawaz Mohamed, 28, and two 16-year-olds from the Qatar Academy high school, Salman Al Sulaiti and Abdullatif Al Kuwari. 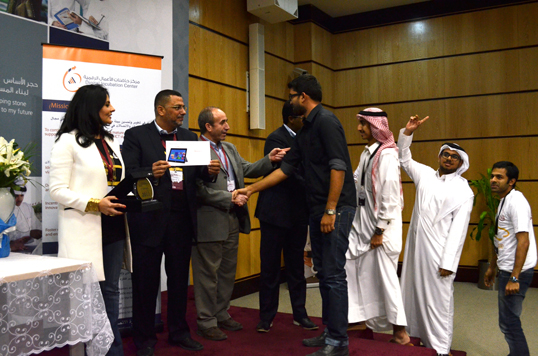 The first-place winners receiving their awards. By Christina Paschyn, 2013.

Ahmed, Kuwari and Sulaiti participated in the event last year and came in second for their product Doha Links, an infotainment system they had hoped to install in the country’s taxis. They said their original idea did not take off because q.media, a government-owned advertising company, wanted to charge the team high commission fees from any ad revenues they earned.

However, Sualiti said he thinks their new product will succeed because it does not rely on sponsors or partnerships for revenue. “The only reason we won is because our focus was on the users, not the advertisers,” he said. The team plans to make a profit by selling a premium version of the app.

Sulaiti, who thought up the idea, said he hopes more high school students will be inspired to become entrepreneurs instead of waiting until they‘re older.

“There should be more people doing this because it’s not that hard,” he said. “At this age we have the chance to try as much things as possible and gain as much experience as we can. Experience is the most important thing.”

Spidy, a social networking app for gamers, won second place. Created by Latifa Al-Naimi, 21, Hatem Salah, 24, and Yasmin Halwani, 22, the app is part Facebook and EBay, but “minus the chatting.” Gamers can socialize, organize tournaments and sell and trade videogames and consoles through the app.

Third place went to IDIDI, a website where newbie entrepreneurs can connect and obtain services, such as logo creation, for free from one another, just as long as they promise to return the favor in the future.

All three winning teams received a variety of awards, including iPads, Sony Tablets and certificates for startup consultation and incubation services.

Ruba Hachim, a competition judge and the Qatar country-marketing manager for Microsoft, said all six of the competing teams had great ideas but they need to work on their presentation skills.

“All needed to track their time better. We were generous in the Q&A because some of them didn’t even have a chance to explain their revenue model in the presentation,” she said. “The financial model is the most important but many of the teams left it to the very end and didn’t even have time to get to it.”

One of the strengths among this population, however, was its female contingent; although last year’s Startup Weekend Doha – the first – drew only one woman, this year about 30 percent of the 40 contestants were women, most likely helped by the event’s new location at the women’s campus of the Community College of Qatar.

Second-place winners Al-Naimi and Halwani said that the best way to get more women into entrepreneurial roles is to encourage science and math education early on. Their all-girls’ high school was one of the few in Qatar to offer classes on robotics and technology, they explained. Having won first-place in the local round of Microsoft’s Imagine Cup in the past, the two women hope to see more female peers enter the tech startup space in Qatar.