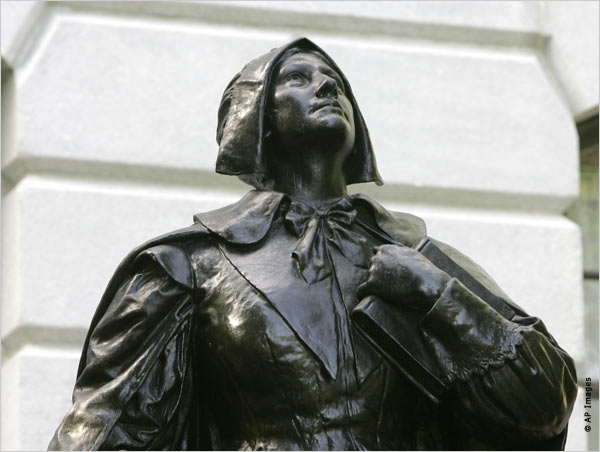 Site intro: This March, for Women’s History Month, the Ms. Blog is profiling Wonder Women who have made history—and those who are making history right now. Join us each day as we bring you the stories of iconic and soon-to-be-famous feminist change-makers.

Patriarchy still rules the roost when it comes to the world’s most popular spiritual faiths. Women are still barred from holding clergy positions in many strains of Christianity, Islam and Judaism, which means they are excluded from the most prominent decision-making roles in organized religion. Yet despite the obstacles women face in achieving full equality with men in the spiritual realm, they have always found a way to maneuver around sexism and get their voices heard. Just how long women have been doing so might surprise you.

Anne Hutchinson was one such woman. The daughter of an Anglican clergyman who had butted heads with church authorities, she became a devout Puritan and supporter of John Cotton, following the renegade preacher from England to the Massachusetts Bay Colony in 1634.

There, she offered spiritual meetings in her home. Around 60 people attended each week (a significant number for such a small colony), including high-profile men such as colony governor Henry Vane, thanks in part to Hutchinson’s reputation as a respected midwife and her apparently skilled capabilities in biblical discourse. During these sessions, she would promote Cotton’s theology as well as share her own spiritual deliberations. This drew the ire of other Puritan leaders who thought both Cotton and Hutchinson’s beliefs strayed too far from Puritan orthodoxy. For one, Cotton and Hutchinson had advocated that God’s grace was all that was needed to save a person’s soul and that good works were not necessarily required.

Both Cotton and Hutchinson were accused of heresy, but Cotton was exonerated and avoided going to trial. Hutchinson, however, did not fare so well. The magistrate John Winthrop, who by then had become the new governor of the colony, was particularly unimpressed with her “very voluble tongue, more bold than a man.” But educated and clever, Hutchinson was able to run circles around her male examiners.

That is until when during her civil trail, Hutchinson claimed God had directly revealed to her divine knowledge and in a powerful statement to the court, she predicted the colony would be destroyed:

“You have no power over my body, neither can you do me any harm—for I am in the hands of the eternal Jehovah, my Saviour, I am at his appointment, the bounds of my habitation are cast in heaven, no further do I esteem of any mortal man than creatures in his hand, I fear none but the great Jehovah, which hath foretold me of these things, and I do verily believe that he will deliver me out of our hands. Therefore take heed how you proceed against me—for I know that, for this you go about to do to me, God will ruin you and your posterity and this whole state.”

Her fiery words earned her banishment from the colony.

To add insult to injury, Cotton and his colleagues went on to excommunicate Hutchinson from the church, saying her views were too extreme from their own. It had been alleged that Hutchinson and her meeting attendees partook in “lascivious” acts. Despite acknowledging the dubiousness of these accusations, Cotton still felt the need to slut shame Hutchinson: in his denunciation of her:

“You cannot Evade the Argument … that filthie Sinne of the Communitie of Woemen; and all promiscuous and filthie cominge togeather of men and Woemen without Distinction or Relation of Mariage, will necessarily follow … Though I have not herd, nayther do I thinke you have bine unfaythfull to your Husband in his Marriage Covenant, yet that will follow upon it. Therefor, I doe Admonish you, and alsoe charge you in the name of Ch[rist] Je[sus], in whose place I stand … that you would sadly consider the just hand of God agaynst you, the great hurt you have done to the Churches, the great Dishonour you have brought to Je[sus] Ch[rist], and the Evell that you have done to many a poore soule.”

Hutchinson and her family re-settled in Rhode Island and are considered some of the original founders of the colony. She lived a tragic life from that point on and suffered a miscarriage, which the Puritan leaders in Massachusetts took as evidence of divine retribution. In 1643, Siwanoy warriors killed Hutchinson and nearly her entire family.

Today, however, the state of Massachusetts honors Hutchinson for having promoted “civil liberty and religious tolerance.” A statue of her stands at the Massachusetts State House in Boston.

Image from the U.S. Embassy.