Creating a network: Spiritual and practical guidance to Chinatown immigrants 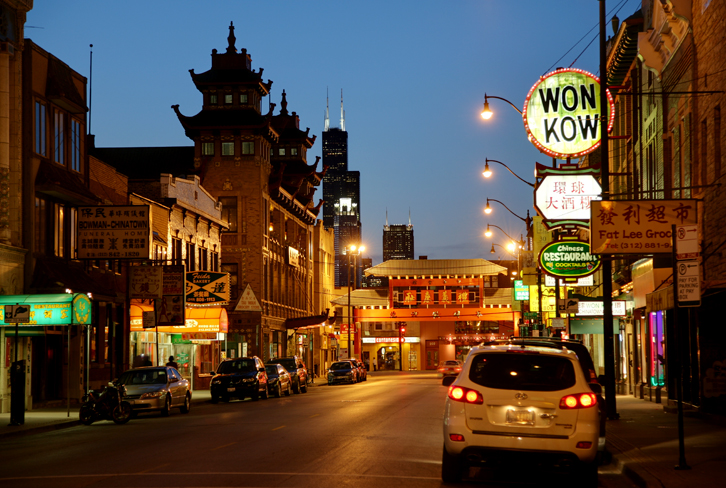 The following article was published by Immigration Here and There in April, 2007. Republished on Immigrant Connect Chicago in August 2009.

The Sunday service had already begun when 23-year-old Thomas Lai slipped into a pew near the back doors of the Chinese Christian Union Church. At the front of the South Side congregation of nearly 200 mostly youthful–and mostly Chinese–faces, a young woman and three young men in matching khakis and white T-shirts turned to their guitars and drum set for a new song.

Behind the band, lyrics about devotion to God projected onto the wall. In front, the packed crowd raised their arms heavenward and sang along like a slightly sedated crowd at a rock concert. Just a block down the street, in a small storefront with a cluttered gift shop, a considerably smaller crowd of Buddhist men and women, some in black robes with their heads shaved, chanted together as the smoke and smell of incense filled the room and wafted onto the street outside.

And just off of Wentworth Avenue, Chinatown’s main thoroughfare, Father Michael Davitti offered communion to parishioners at St. Therese Chinese Catholic Church in front of an altar carved with images of dragons. All of Chinatown, it seemed, had come out on this cold day in March to search for a spiritual connection. But in the largely immigrant community, many had left their homes for something a bit more tangible: networking.

Chinese immigrants have been coming to Chicago for more than a century, although discrimination and strict immigration policies limited their numbers for several decades. But following the passage of the Immigration and Nationality Act of 1965, Chicago’s Chinese community swelled, pushing the boundaries of Chinatown outward and creating new communities throughout the city and surrounding suburbs, including the “New Chinatown” neighborhood on the city’s North Side.

By 2000, the U.S. Census revealed that more than 48,000 Chinese and Chinese-Americans were living in Cook County and more than 30,000 had made their homes Chicago’s city limits. As the community grew, so did all the institutions that went with it, including churches and temples. Though they had come from a country that has been officially atheist since 1949, many Chinese in Chicago embraced organized religion as a tool of community engagement and social growth.

“For immigrants, the church is a source of social structure and intergenerational transfer of culture,” said Carolyn Chen, a Northwestern University sociology professor who studies the religious conversions of Asian-Americans. “It’s a place to build a sense of self and take on active leadership roles. The church really fulfills a lot of social functions.”

While religious organizations have always played a role in the Chinese immigrant community, services like job training and placement, English language classes and housing distribution were once largely the purview of family associations that dominated Chinatown politics and business.

But as the community grew, so did the demand for larger, structured social aid systems. By the 1950s, the evangelical Chinese Christian Union Church (CCUC), the largest Chinese church in Chicago, had launched a number of programs for non-English speaking Chinese immigrants. By combining community aid and religious messages, the church attracted immigrants through everything from children’s sports tournaments to language training. Victor Louie, 43, came to Chicago from Hong Kong with his family in 1972. In Hong Kong, Louie said, the family practiced “no specific religion,” but by the time he became a teenager he was on the road to a Christian conversion.

“I came to the church because I was enrolled at the elementary school nearby and I was in English classes and fellowship groups and I’d come to play at the gym in the church,” he said. “I wasn’t a believer at the time.”

Louie was baptized at 16 and has remained faithful in the decades that followed; he is now a church trustee and volunteers with his wife as a bible study leader on the weekends.

He also follows the church’s evangelical mission, doing outreach work with his non-Christian and newly immigrated neighbors. Belonging to the church, said Louie, has provided a framework for his life on spiritual and social levels. According to Chen, many Chinese immigrants follow Louie’s path, hoping that conversion and church membership will help ease the difficulty of building a new life halfway around the world from home.

“Religious groups are extremely helpful to immigrants,” she said. “There are a lot of social and economic incentives for converting as well. I think that people–in every class–make religious decisions based on a practical reality. The church provides a network of co-ethnics, job connections, and the basic ethic is to help people.”

In 1994, CCUC expanded that network with the purchase of a massive red-bricked building with green pagodas on Wentworth Avenue that became the Pui Tak Center, a faith-based community and family center offering classes in English, music, and computer literacy along with a weekly Mandarin-language church service. And while church membership is not required to participate in Pui Tak activities, some of the immigrants served do convert to Christianity. According to David Wu, the center’s executive director, the church’s evangelical mission does make an appearance in its community services, which are targeted to recently-arrived immigrants. “Part of the motivation is Christian expression–to meet new immigrants and share the Christian faith,” he said. “We find a balance between the two.”

Other religious groups in the Chinatown neighborhood attract immigrants through similar blends of spiritual and practical outreach. Just a block from CCUC, the International Buddhist Friendship Association sells Buddhist books CDs and statues along with robes and incense. Behind the gift shop, Buddhists can visit a small room decorated with images of Buddha and filled with the smell of incense on any day of the week.

On a busy day, 50 or 60 Buddhists will stop by for chanting and meditation. Many visitors–most of them immigrants–also stop by for help with a variety of tasks and issues. Carl Jerome, a lay protector (a Buddhist leader who is not a monk or nun) at the Friendship Association, takes calls and visits everyday from immigrants looking for help translating their mail or explanations of complicated bank statements.

“We provide non-specific services of all kinds,” he said. “One woman was just here and she brought in her mail–complicated credit card statements and offers for cell phones. How is she supposed to make sense of it all? We do whatever is necessary to support them.”

At the St. Therese Chinese Catholic Church two blocks west, Father Michael Davitti reaches out to immigrants by expanding the framework of traditional Catholic doctrine. The Italian-born priest, who has been at the Chinatown parish since 1999, blends Chinese traditions like the celebration of the Lunar New Year into his weekly services, which attract an average of 250 to 300 people. In his office, books on Chinese culture, Confucianism and Zen Inspiration sit alongside works on Catholic history and Catechism of the Catholic Church. On the wall above his desk, two images of Buddha flank a portrait of Jesus. In the dining room, paintings depicting Jesus and Mary with distinctly Eastern Asian features hang above a collection of Chinese pottery. Some visitors are alarmed by the blending of traditions, but according to Davitti, such openness is necessary in a diverse parish.

“We have Cantonese speakers, Mandarin speakers, Indonesians, Italians, Filipinos,” he said. “Religion unifies, it serves as a link. It’s a way of strengthening ties to the community.”

Davitti has traveled throughout China and Eastern Asia studying the practice of Christianity and other religious traditions, including Buddhism. In China, Catholics have been persecuted for years by government officials who find fault with the church’s global hierarchy system and loyalty to the Pope, the official head of the entire Catholic Church. In Chicago, however, Davitti said that many Chinese are attracted to Catholicism because they are able to blend family traditions into their faith. Inside the St. Therese church lies a statue of Mary covered with a lace cloth for Lent – a distinctively Italian tradition.

Juxtaposed to the statue is a table with offerings of fruit to Chinese ancestors as a part of the New Year celebration. Ancestral worship is a common in China, and the symbol has risen more than a few eyebrows by Christians who believe that praying to dead relatives is akin to blasphemy. But Davitti, who says this ancient practice is compatible with the Catholic tradition of praying to saints, remains determined to incorporate the entire community into the church.

Despite the openness of Davitti and other spiritual leaders and the community services provided by them, many Chinese-Americans are hesitant to make the leap to a religious conversion of any kind. Older immigrants are particularly resistant to Western religious traditions and practices. Louie’s parents, now in their 70s, considered conversion after immigrating to the United States, but eventually rejected the idea. “All their lives they never stepped into a church,” Louie said of his parents. “They practice some Chinese folk culture…but they are close to 70 years old. I can’t imagine them singing hymns or listening intently to what the preacher says like I do.”

And though many churches and temples offer multi-language services, the language barrier can be a major obstacle to becoming a member of a religious community. Among Cook County’s Chinese population, an estimated 40,439 people speak a language other than English at home. At CCUC, church services are offered in English, Mandarin and Cantonese, but the non-English services are attended by a much smaller–and much older–congregation.

‘The church has an interesting identity because every congregation has a different demographic,” Wu said. “At our Cantonese service, I’d say that at least 40 percent of the people are over 60 years old.’

Among younger immigrants, who make up most of the congregation at the English-language services and activities, attending church often slips low onto the list of priorities in a life characterized by hard work and sacrifice in a completely foreign place.

“For immigrant adults, they have to sacrifice a lot to make it here,” Wu said. Religion can be on the periphery of the needs of their time. You work all day in a restaurant, you don’t have Sundays off, so there’s not much time for anything else.”

As a result, the majority of Chinese immigrants do not convert to any religious tradition. In Chinatown, Wu estimates that approximately 5 percent of residents are Christian–a low percent that mirrors the number of Christians in China. But among the converted, loyalty to church and community runs deep. Many CCUC members who move out of the Chinatown area still return for weekly services or donate money. Church leaders work to attract children and teens who they hope will become lifelong members.

“The church has been most effective in its work with young people,” Wu said. “A lot of kids that grow up in the church stay and become the next generation of youth ministers and counselors.”

And according to Wu, many parents who reject Christianity themselves encourage their children to convert with the hope that it will help them become a part of the larger American community and move up the socioeconomic ladder.

Though religious conversions among the Chinese-American community are made for a variety of spiritual and practical reasons, Chen said that no one individual’s path is necessarily more valid or sincere than the next.

“To convert for material or social reasons is no less authentic,” she said. “There is pressure from multiple sources, but conversion is rarely so utilitarian or calculated.”

And in any type of religion, Davitti said that the Chinese community makes the traditions and day-to-day practice something entirely unique.

“The Chinese soul absorbs a lot of influences,” he said. “They contribute and express themselves in a new manner, a Chinese manner.”