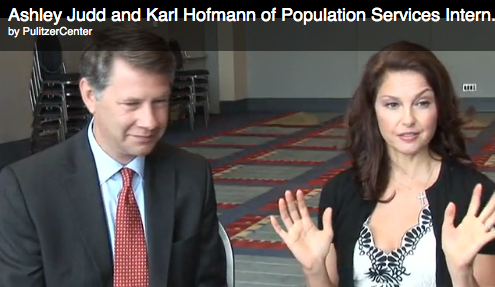 Published by the Pulitzer Center on Crisis Reporting on June 21, 2010.

When Melinda Gates addressed the Women Deliver Conference in Washington earlier this month, she said in her speech that preventing women from using “safe and effective tools” for family planning was “reckless.”

She also announced a pledge of $1.5 billion from the Gates Foundation to global reproductive health programs over the next five years. In an interview afterward with NPR, Gates spoke about the cultural barriers to family planning. “I actually think the biggest barrier is sometimes the American public,” she said. “…we seem to have an issue about should we get these tools out there and why. We make it a big debate and it really shouldn’t be.”

Conference presenter Mary Robinson also addressed cultural and, specifically, religious barriers to implementing family planning programs at a Women Deliver press conference. Robinson, the first woman president of Ireland, said that when she took office in 1990 only married women had legal access to birth control. She was denounced from the pulpit for her efforts to reform Irish family planning laws. She now advocates for family planning and reproductive health as a human right, especially in developing countries with high maternal mortality rates.

The fact that family planning programs often include information about and access to abortion services only intensifies the debate. The result: a yo-yo effect in aid dollars to organizations like the United Nations Population Fund (UNFPA). The Bush administration withdrew $34 million from UNFPA support in 2002 (and even more in subsequent years). President Obama has restored some of that funding, but the controversy continues to affect aid. None of the Gates Foundation funding, for instance, will go towards abortion services and the foundation avoids taking a stand on abortion.

Meanwhile, UNFPA reports that 20 million women have unsafe abortions every year of which 3 million go without care for abortion-related complications. UNFPA also estimates that 215 million women around the world need but do not have access to modern contraception. If this need were met, the report says, unsafe abortions would decrease by 73% and maternal deaths would decrease annually by 240,000-390,000.

Family planning not only reduces a woman’s risk of dying of unsafe abortions, but also lowers a woman’s lifetime risk of dying during pregnancy and childbirth by making birth spacing possible.

In addition, family planning and modern contraception allow adolescent girls, who are at a higher risk of maternal mortality than women in their twenties, to delay pregnancy until their bodies are fully developed. This is especially important in many developing countries where the marriage age for women is extremely low. (See articles by Pulitzer Center journalists Hanna Ingber Win and Haley Sweetland Edwards)

Finally, there are population concerns to consider in promoting family planning in conjunction with lowering maternal mortality. The US Census Bureau predicts that world population will surpass 9 billion in 2050 before it begins to decline. Historically, death rates fall as countries develop and diet, standard of living and medical care improve. But initially birth rates continue to rise causing the population to grow. Eventually, the growth peaks as birth rates also begin to fall and the population stabilizes or begins to decrease. As this “demographic transition” occurs, it strains the economic resources and burgeoning health care systems of developing countries and often causes destabilizing violence. Family planning is a way to expedite the transition, increase global security and minimize needless suffering.