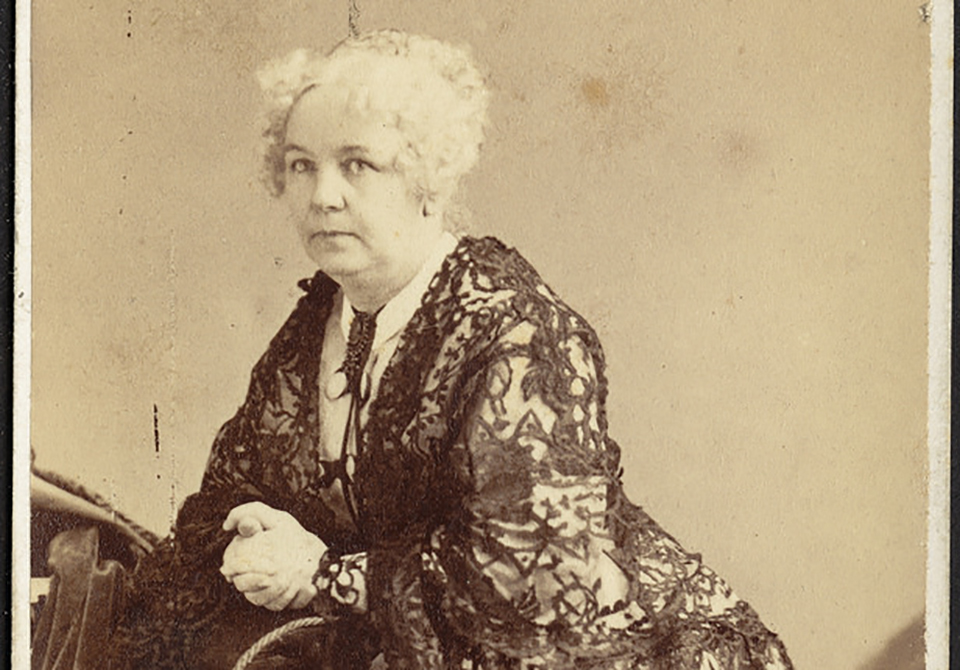 When most people think of the American women’s suffrage movement, they probably think of Susan B. Anthony, the renowned women’s rights campaigner who was immortalized on a one-dollar coin. While Anthony may forever be considered the face of the early feminist movement, she did not succeed in raising the status of women on her own. She relied on the passion and intelligence of many women, including Elizabeth Cady Stanton, who was a vanguard in her own right.

Stanton had campaigned for women’s equality and the right to vote long before Anthony arrived on the scene. At the historic Seneca Falls Convention in July 1848, she authored the inspirational Declaration of Sentiments. The document listed what the convention delegates believed to be the true, “inalienable rights” of women, as well as the injustices that had been inflicted upon the female sex. Among the points, this incisive critique of androcentric religion:

“He allows her in church, as well as state, but a subordinate position, claiming apostolic authority for her exclusion from the ministry, and, with some exceptions, from any public participation in the affairs of the church.”

When discussing women’s rights in the 19th and early 20th centuries, many textbooks and school lessons may sometimes focus on early feminists’ fight for the right to vote. But while this may have been the over-arching goal for many women of the time, it was by no means the only one. Stanton, for one, was not only determined to achieve political rights for women but also true equality for them in all aspects of society—above all, in religion.

Among women in her era, Stanton was radical in every sense of the word. When she wed, she had the word ‘obey’ struck from her vows. According to religious studies and American studies scholar Maureen Fitzgerald, Stanton attributed women’s inferior position in the world to patriarchal interpretations of religious texts and the erroneous belief that the Bible was divinely written and therefore not open to criticism; she believed women would only be able to achieve true equality when sexist religious beliefs and traditions were fully eradicated.

Unfortunately for Stanton, the demographics of the suffrage movement were changing. As Fitzgerald writes in her foreword to a 1993 re-publishing of Stanton’s The Woman’s Bible, more evangelical Christians began to embrace women’s suffrage, believing that giving women the vote would help to transform America into a more pious society. Invoking women’s so-called “motherly” nature, they believed that women were more moral than men and would help to usher in laws supportive of Christian ethics, such as requiring Bible studies in schools and banning alcohol.

Fitzgerald goes on to explain that Stanton was disappointed with this demographic shift within the movement. She wanted suffragists to radicalize and challenge religious patriarchy, which she saw to be the root of men’s domination of women. Instead, by embracing traditional Christian beliefs, suffragists were further entrenching sexist gender stereotypes and expectations.

As part of her efforts to expose the misogyny of patriarchal Christianity, she organized a committee to produce a feminist critique of key passages of the Bible. Their resulting work was The Woman’s Bible, first published in 1895.

The Woman’s Bible was a revolutionary work and surprisingly became a bestseller. Unfortunately, many of Stanton’s suffragist sisters were not enthusiastic. Uncomfortable with her unorthodox beliefs and fearful the book would ultimately undermine their movement, the National American Woman Suffrage Association approved a resolution that disassociated the group from it.

(It should be noted that Anthony, though always a loyal friend to Stanton, wasn’t a fan of her religious debates either, according to Fitzgerald. Though not necessarily against the content of Stanton’s beliefs, Anthony also feared these debates would distract from the issue of women’s suffrage. Despite this, she rallied against NAWSA’s resolution.)

It’s a shame this part of Stanton’s work is not given nearly as much attention as it deserves. In many ways The Woman’s Bible shows how she and her supporters were ahead of their time. In it, they write of God being a Heavenly Mother and discredit exclusively male interpretations of the holy text. Had Stanton written it now, she would be welcomed with opened arms by the slew of feminist theologians who continue to advance her cause. Her woman-positive commentary would not be categorically dismissed or scorned. Indeed, The Woman’s Bible laid the groundwork for our current, modern-day re-thinking of the Bible and the new, non-sexist interpretations of it that are embraced by many today.

However, religion is still largely a patriarchal affair. Despite Stanton’s critique in the Declaration of Sentiments that men have unjustly denied women equality in institutionalized religions, most of the widespread, mainstream faiths continue to ban women from serving as ministers, priests, imams, rabbis or the like. No doubt she would be disappointed to see this today.

Perhaps we should all meditate on Stanton’s words in her introduction to The Woman’s Bible:

“Why is it more ridiculous for women to protest against her present status in the Old and New Testament, in the ordinances and discipline of the church, than in the statutes and constitution of the state? Why is it more ridiculous to arraign ecclesiastics for their false teaching and acts of injustice to women, than members of Congress and the House of Commons? Why is it more audacious to review Moses than Blackstone, the Jewish code of laws, than the English system of jurisprudence? Women have compelled their legislators in every state in this Union to so modify their statutes for women that the old common law is now almost a dead letter. Why not compel Bishops and Revising Committees to modify their creeds and dogmas?”