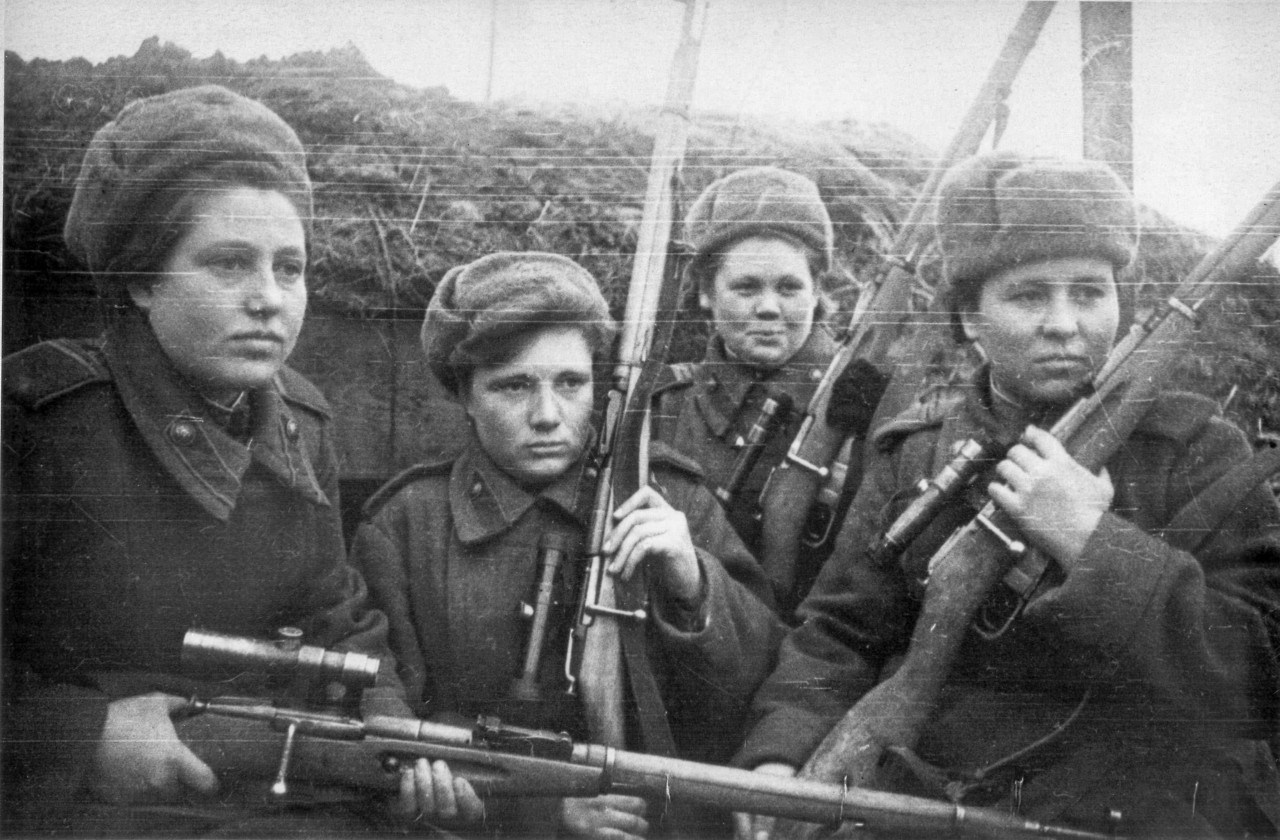 Published on Feministing.com, April 2014. How come Soviet sniper Vasily Zaitsev gets to be played by Jude Law in Enemy at the Gates but Lyudmila Pavlichenko gets squat?

Cara Hoffman has a wonderful op-ed in the New York Times this week about America’s female soldiers titled,The Things She Carried. She explains how our nation’s women warriors and their heroic contributions go unrecognized and ignored by the public and pop culture. I’ll let her writing set the scene:

“Women have served in the American military in some capacity for 400 years. They’ve deployed alongside men as soldiers in three wars, and since the 1990s, a significant number of them are training, fighting and returning from combat.But stories about female veterans are nearly absent from our culture. It’s not that their stories are poorly told. It’s that their stories are simply not told in our literature, film and popular culture….Male soldiers’ experiences make up the foundation of art and literature: From “The Odyssey” to “The Things They Carried,” the heroic or tragic protagonist’s face is familiar, timeless and, without exception, male. The story of men in combat is taught globally, examined broadly, celebrated and vilified in fiction, exploited by either side of the aisle in politics. For women it’s a different story, one in which they are more often cast as victims, wives, nurses; anything but soldiers who see battle. In the rare war narratives where women do appear, the focus is generally on military sexual assault, a terrible epidemic of violence that needs to be revealed and ended, but not something that represents the full experience of women in the military.”

Coincidentally, before I read her editorial, I came across this trailer for a film about a young Hungarian man who saves his family (and, of course, a woman he loves) from the Nazis during World War II by donning the enemy’s uniform. When I watched it, I noted how this was yet another film about a male war hero, and I wondered why women’s experiences during conflict never seem to be told. And if they are, they are typically depicted as victims in need of rescue, or as love interests of the male main character. Just as Hoffman writes, which is why her op-ed resonated so strongly with me when I read it later.

There are so many films about men acting brave on the battlefield or saving people’s lives during the Holocaust. Like Inglorious Bastards, Saving Private Ryan, Defiance, etc. The list goes on and on. But nobody seems to acknowledge that there were many heroines, too, who served their countries during World War II as spies, pilots, snipers and fighters. Like Nancy Wake, an Aussie spy who apparently killed a SS soldier with her bare hands, or Lyudmila Pavlichenko, a Russian sniper. (Read about these women and others here). And what about America’s Fly Girls? Can anyone seriously say with a straight face that these women aren’t worthy of an epic Hollywood action film? How come Soviet sniper Vasily Zaitsev gets to be played by Jude Law in Enemy at the Gates but Pavlichenko gets squat?

One woman who particularly stands out in my mind is Hannah Szenes, the Jewish poet and paratrooper who jumped into Yugoslavia to help save Hungarian Jews during the Holocaust. She was later tortured and executed by the Germans.

A documentary about Szenes’s life came out in 2008, and there was a feature film about her in 1988, but I don’t think it was widely released in the United States.

From Szenes and Wake to all the other female warriors who fought in WWII and before, there are so many amazing women soldiers who deserve to be highlighted in pop culture. They deserve to have feature films made about them. They deserve to influence our concept of bravery and heroism just as much as the often fictionalized, hyper-masculine war movies we get inundated with on a yearly basis do. Why hasn’t Hollywood bothered to put these women up on the Silver Screen?

There’s a great open letter to Hollywood circulating around, written by the heads of The Representation Project. In it, they write women continue to buy more movie tickets than men (plus make up 50% of the population!) but still remain massively underrepresented on the big screen. I really hope someone in Hollywood reads it and actually takes the time to consider its points. We are in desperate need of female protagonists in mainstream films, including female war heroes.

For better or for worse, pop culture strongly influences everyday life and our mainstream society. If we don’t start depicting these women in Hollywood films, how will America ever come to appreciate its female soldiers – women who are risking and often sacrificing their lives for our safety and freedom? How will girls and young women come to recognize and appreciate their own potential and physical and mental prowess? These women deserve recognition as well as our appreciation and support. As Hoffman writes:

“I’ve stood next to my uniform-wearing brother, a veteran of two tours in Afghanistan, in a grocery store while three separate strangers approached to thank him for his service. Women veterans are rarely stopped by people who want to shake their hands. Even wearing fatigues and boots and carrying duffel bags standing in a bus station or at the airport, somehow they go unrecognized as returning warriors. The sense of emptiness that can follow unacknowledged accomplishments and unacknowledged trauma makes women soldiers feel invisible and adds yet one more insult to injury. Depression, drug and alcohol abuse, homelessness and suicide do not just affect male soldiers, though theirs are the stories we see. Women who have served in the military are three times more likely to commit suicide than their civilian counterparts. I can’t help but think women soldiers would be afforded the respect they deserve if their experiences were reflected in literature, film and art, if people could see their struggles, their resilience, their grief represented.”

So regardless of what Hollywood does, I hope you will at least heed Hoffman’s message: the next time you see a woman combat veteran or soldier on leave, thank her for her service.