In the Land of Kilts: A Look at the Ukrainian Diaspora in Scotland 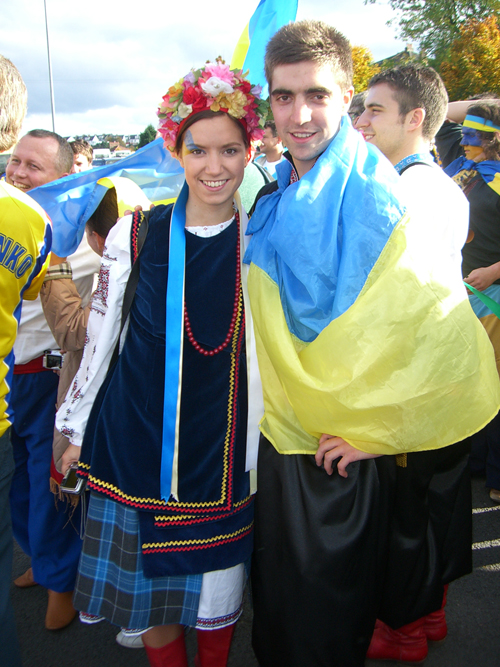 Published in Spectrum: Quarterly Magazine of the British Ukrainian Society. Download the PDF of this article (starts on page 26).

Take a trip to Scotland and you’ll most likely see the usual tourist sights: the monumental Edinburgh Castle, the rugged Scottish Highlands and a mysterious loch or two.

For a night out, you’ll probably order a pint at the Frankenstein theme pub in Edinburgh or dance until the wee hours of the morning at one of the many posh clubs in Glasgow.

But some weeks ago a different sort of attraction lured a group of English and American tourists to the land of kilts, where they spent their Friday night at an obscure pub in need of redecorating: the Edinburgh Ukrainian Club.

“Traveling to all the foreign countries and seeing the Ukrainian clubs in London and in Edinburgh, we kind of joke that it’s all the same ’70’s vinyl furniture that we have at home,” said Taras Jaworsky, a 47-year-old Ukrainian American from Chicago.

To be fair, Mr Jaworsky and his fellow Ukrainian diaspora members did not fly thousands of miles to Scotland just to drink at the country’s only Ukrainian hub – although its one pound beers certainly didn’t deter them. Dressed in bright yellow Ukraine football shirts and traditional Ukrainian costumes, they had come to watch the Ukraine national team play against Scotland in the UEFA Euro 2008 qualifying football match on Oct. 13 th.

“We went to Germany for the World Cup [to follow the Ukrainian national team] and the Ukrainian community there did nothing for us – the Ukrainian fans. But here they made sure we were taken care of,” said Ms Chymera from London, who wore a red-embroidered blouse and a colorful “vinok” or head wreath on the day of the match.

“Maybe it’s just because it was such a big opportunity for them to build their community.  It’s been falling by the wayside because there aren’t enough Ukrainians in Edinburgh to sustain it, so it’s like their big selling point to get more Ukrainians to get involved,” she said.

Second-generation Scottish Ukrainian Alex Demianczuk hopes that last month’s festivities have re-ignited the ethnic pride of Edinburgh’s lapsed Ukrainians. The 28-year-old from Edinburgh – who often dons a blue-and-yellow kilt at football matches to show just which team he supports – spent six months organizing match tickets and planning a “zabava” or dance for the visiting Ukraine supporters. 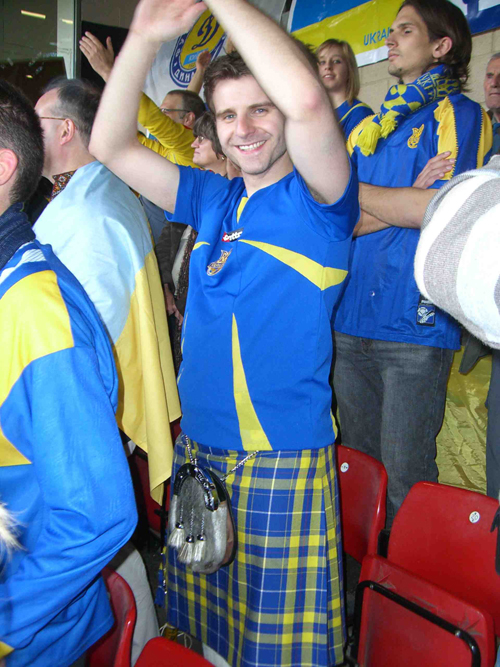 “There aren’t that many young people in the community, so we need to attract them,” said Mr Demianczuk, who is also the club secretary of the Association of Ukrainians in Great Britain (AUGB), Edinburgh branch. He hoped the advertising for the game and the dance afterwards would encourage newcomers to become involved in the club, and entice those who have fallen away to become interested again.

Yet despite all of his hard work, Mr Demianczuk has little confidence that his efforts will keep the Edinburgh diaspora alive and thriving.

“There are too many people within the community who come along when we have an event, but that is it,” he explained. “They do not wish to support the community in other ways and there are also not enough who wish to work for the community.”

Even more depressing, only about a hundred Ukrainians actively participate in the community by attending Ukrainian church services, youth group activities or club meetings. That figure includes both Fourth Wave immigrants and second- and third-generation Scottish Ukrainians.

“It makes me feel sad to think that we could lose what we have here, especially as our parents and grandparents did everything they could to build a community here for us,” said Lesia Demianczuk, 30, who is Mr Demianczuk’s sister.

“There are only about eight to ten young adults and a handful of young children who participate in the community on a regular basis,” she lamented. “In the next 10 to 15 years, it’s hard to say whether the community will still be here.”

It wasn’t always like this. Ms Demianczuk said the Ukrainian community in Scotland once resembled many of the diaspora communities in England and America.

They had it all: a Ridna Shkola (school of Ukrainian studies), a Ukrainian dance troupe and a SUM (Ukrainian Youth Association) Club. But low numbers forced all three to close years ago.

“There are a lot of things that can be done,” said the 23-year-old from Galashiels. “Like giving the Ukrainian Club a wee lick of paint would do for a start. I think some general fundraising would boost the financial aspects of the club and allow the opportunity for improvement.”

Her 22 year old brother, Michael, agreed and said many would like to keep the community alive.

“Hopefully the profile of Scottish Ukrainians can be raised enough to keep it active. The Edinburgh community does have a small but thriving membership that does put on several events a year, however these are quite low key and only regular members attend.”

But he believes that events like the Scotland-Ukraine game show that the Scottish diaspora still know how to put on a good zabava, and people will remember that.  “Hopefully this can be built on, and if more grand scale events are put on then it would give more funds that would help sustain the club”, said Mr Kerr.

Yet while Scottish Ukrainians may see room for improvement in their community, the Ukraine football fans that descended on Edinburgh were much more positive.

“I really have to give big kudos to Scotland,” said 41-year-old Ukrainian American Andriy Futey from Cleveland. “They are probably the smallest in numbers and it was a large burden, but they really did a fantastic job”.

For Mr Demianczuk that comment is proof enough that even amidst a thinning population, Scottish Ukrainians will never loose their ethnic and national pride.

“For me it’s a mixture of the two greatest nations in the world! I am always proud of being Ukrainian. And although it’s not an independent nation, I have always been proud to say I’m from Scotland.”

So with his Ukrainian kilt in tow, Mr Demianczuk will continue to promote his unique heritage, hoping that his fellow diaspora members will follow suit. “It is a part of who I am. I was brought up in the Ukrainian way, and I will try to continue it.”