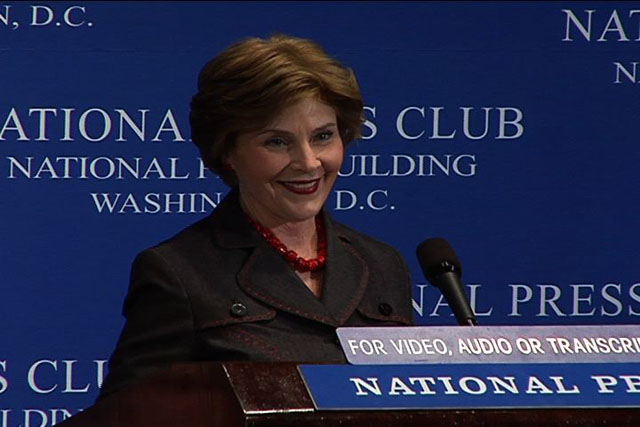 First Lady Laura Bush spoke at the National Press Club in Washington, D.C. Wednesday, addressing a topic that she calls essential to American security: the future stability of African nations.

“…Misery and oppression on another continent can manifest themselves on the next block, a lesson that has been re-taught in cities from London to Madrid to Jakarta,” Mrs. Bush said.

The First Lady also told several anecdotes about her husband’s global relief initiatives.  She says the President’s Emergency Plan for AIDS Relief called PEPFAR is making a difference in Africa.

“They speak of a Lazarus effect, where people who once waited quietly for death celebrate a second chance for life,” she explained.  “These daily miracles are made possible by partnerships like PEPFAR, the compassion of the American people and through the determination of citizens throughout Africa.”

Mrs. Bush urged congress to extend PEPFAR for five more years and to double funding for the program to $30 billion.  If Congress agrees, the United States will have provided Africa with more than $48 billion in aid in over ten years.