Luis Moreno-Ocampo on Darfur, the LRA 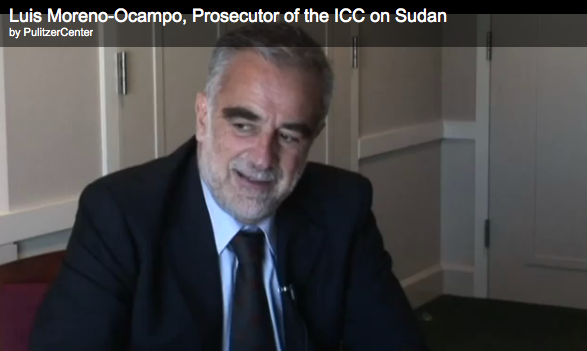 Published by the Pulitzer Center, Sept. 2010.

Chief Prosecutor of the International Criminal Court (ICC) Luis Moreno-Ocampo visited Washington last week, urging American policymakers to take the lead in efforts to salvage Sudan’s five year-old Comprehensive Peace Agreement (CPA) as the scheduled January 2011 referendum on southern independence approaches. President Obama will attend a meeting on Sudan before the UN General Assembly on Friday, September 24, when he will also meet with Sudanese leaders from the north and south.

The court issued a warrant for the arrest of Sudanese President Omar al-Bashir following April 2007 warrants for former Sudanese Minister of State for Humanitarian Affairs Ahmad Harun as well as former Janjaweed commander Ali Kushayb on charges of war crimes and crimes against humanity in Darfur and later, in al-Bashir’s case, genocide. Ocampo’s message emphasized the importance of increasing international pressure on the Sudanese government to execute the Harun warrant; following its issuance, Harun remained in his ministerial post and, in an act of defiance by al-Bashir, was appointed to lead an investigation into the very subject of allegations against him. Harun later assumed his current post as governor of the contested border state of Southern Kordofan, which is heavily populated by the southern Nuba people, though the CPA places it in the north.

The UN Security Council called for the Sudan warrants as Sudan is not party to the Rome Statute which established the court. The ICC usually acts at the request of state governments which creates a quandary for the service of the warrants. Under the ICC, state governments typically apprehend the accused.

Ocampo also addressed ICC warrants for five high-ranking members of the Lord’s Resistance Army (LRA), including its leader, Joseph Kony, on charges of war crimes and crimes against humanity. The rebel faction, which emerged in 1987 as an insurgency against the Ugandan government, is responsible for more than twenty years of war across northern Uganda, Sudan, Central African Republic and Democratic Republic of Congo. LRA practices include institutionalized murder, rape, sexual slavery and use of child soldiers. In May of this year, the U.S. Congress passed the Lord’s Resistance Army Disarmament and Northern Uganda Recovery Act, setting a November deadline for devising an effective strategy to combat the group.

The LRA and Darfur headlines represent the tip of the iceberg of an East African political situation far more convoluted than typically conveyed by Western media. The two sets of cases are closely related: The Ugandan government supported the Sudan People’s Liberation Army (SPLA) of south Sudan against the north; Khartoum, in turn, provided Kony’s LRA with weapons. Though the LRA is currently active in the Democratic Republic of Congo, reports earlier this year suggested Kony had found a safe haven in Darfur.

Above, Ocampo discusses this connection, the distinct challenges of prosecuting the cases and the need for international action and U.S. leadership. He cites the Invisible Children campaign, which raised public awareness about the LRA through media-based activism, helping to precipitate U.S. legislation.