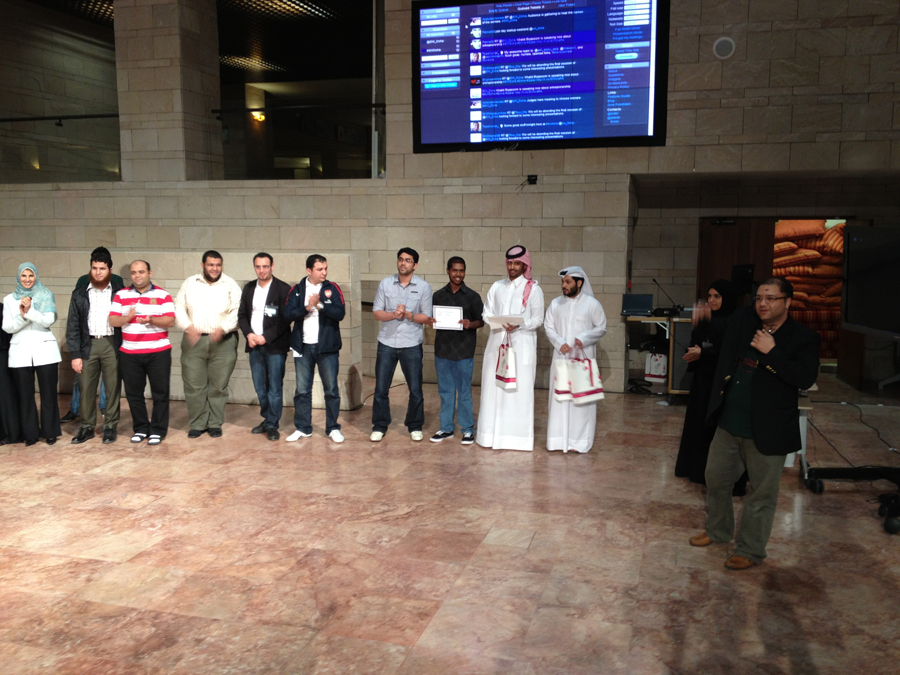 More than 30 budding entrepreneurs pitched their innovative business ideas at Startup Weekend Doha this past weekend.

Forming their ideas from personal experience and need, most of the weekend’s participants pitched startups that would fill a practical niche for the Doha community, such as a grocery delivery service, an event listing website and an Arabic-language technology magazine. Clearly dedicated, many incorporated motion-based power point presentations and drafted functioning mock designs of company websites. Some of the presenters were also so enthusiastic, that they often interrupted the judges during the question and answer period to add more details.

The best idea turned out to be Doxa, a comprehensive online review site created by Adil AbdulAziz, Rashid Al-Naemi, Tejas Kumar and Nasser Al-Naimi, who are all 25 or younger. The platform is a free forum where people can share their opinions on literally everything and anything, from technology and apparel to even furniture and government services. For a fee, Doxa would also provide businesses with detailed data analysis and trend detection on worldwide comments about that company and its services.

Doha Links, a company that would provide infotainment devices in local taxis, was voted first runner up. Founded by Mufeed Ahmed, 27, and Abudllatif Al-Kuwari and Salman Al Sulaiti, who are both only 15, the team based their device off existing models operating in taxi cabs in New York and Dubai. How their version differs, they say, is that it provides actual interactive functionality, access to the Internet and quality information instead of just paid advertisements. They presented a working model of their proposed infotainment tablet.

The second runner up was Time Bank, founded by Majd Alshibli, 23, Ismail Mohammed, 30, and Malaka Al-Said, 24. Time Bank is a social organization that helps to connect students with potential employers by training them to fill temporary vacancies at participating companies. The company would only pay Time Bank if they decide to hire the student full time. Meanwhile, the student would also receive “time credit,” which they can exchange for other Time Bank services, such as further skill training.

Guest speaker Khalid Aboujassoum, co-founder and executive manager of ibTECHar, an education technology startup, praised the presentations, while encouraging participants to think globally instead of locally and to move away from business models that rely heavily on ads for revenues.

“People are thinking of localizing global services. They want to create the Groupon of the GCC or Qatar or the Ebay of Qatar, and all of that,” Aboujassoum said. “It’s important to emphasize that we need these services; I’m not saying we don’t need them. It’s just that we don’t want to get into this black hole of localizing things when the doors are really open for globalization.  We need to have the mindset that ‘I want to create the next Facebook’ and not just ‘I want to copycat one of the existing success stories.’”

“Localization also puts everyone in the advertising model, and advertising is a very, very, very vulnerable business model,” he added. “It’s about eyeballs and sights, and people’s interests can change overnight. It’s the easiest way for you to propose to make money; you think, ‘yeah, I’ll just use advertising.’ But there is a system that advertising works upon; there are certain rules that you need to oblige yourself to. This is where entrepreneurs get into trouble. So my point is that advertising is just a symptom of a bigger [and problematic] way of thinking, which is localizing rather than globalizing.”

Christina is a multimedia journalist and Lecturer of Journalism in Residence at Northwestern University in Qatar. She previously worked at the Pulitzer Center on Crisis Reporting, and has reported for major news organizations across the globe, including TIME Magazine and the CBS News bureau in London, E News in Johannesburg, and KVRR-TV as the station’s political correspondent in Washington, D.C. In 2009 she reported on the Gaza War for CNN as well as WEWS News Channel 5 in Cleveland.  Christina holds a BS and MS in broadcast journalism from the Medill School of Journalism at Northwestern University and studied abroad at the American University in Cairo.