Profile of a Ukrainian-American Icon 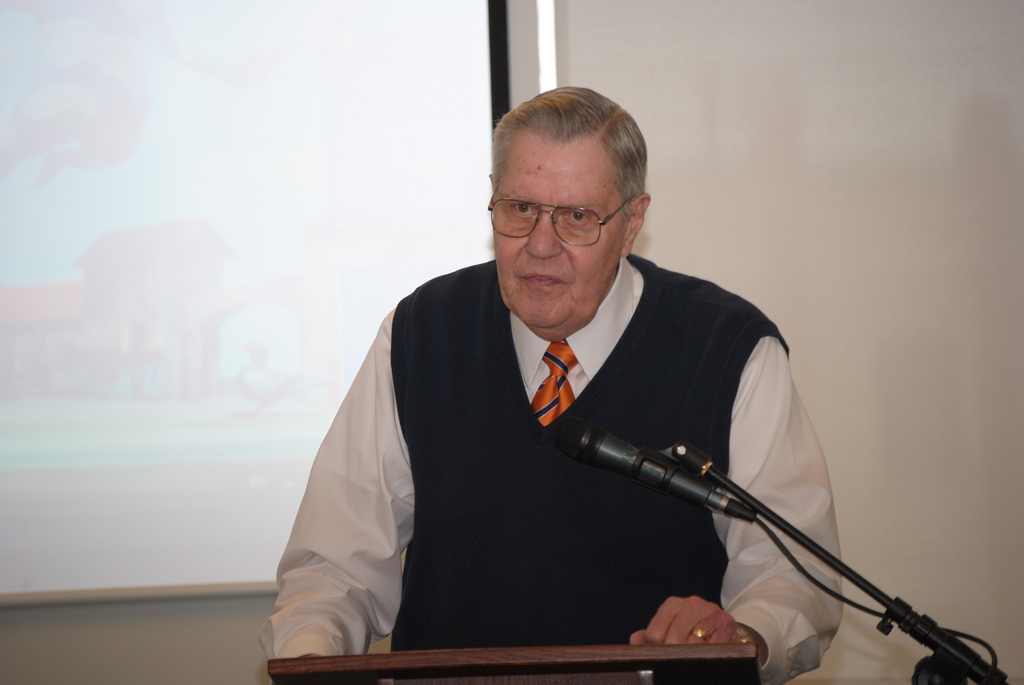 Published on the Universal Journal/The Association of Young Journalists and Writers website.

Dressed in a matching shirt and vest, he entertains his restless granddaughter during Sunday mass. When the priest gives the final blessing, Kuropas speedily weaves through the line walking down the narrow staircase to the church basement. He heads toward the food counter, where he speaks in Ukrainian to the kitchen worker. Chatting with friends along the way, he carries his plate of cookies to a table at the back of hall, where he sits down with his wife. He and his wife, Lesia, lock eyes and laugh at the one another’s jokes. They talk about their recent 40th wedding anniversary on Oct. 24.

Kuropas’ adoration for his wife is obvious as he describes the “marriage encounter weekends” he and his wife presented during the 1980s in both the U.S. and Ukraine. The workshops were intended to open communication in a couple and to renew marriage vows. And Mrs. Kuropas reciprocates the sentiment as she explains how “heaven” for her five grandchildren is playing with their grandfather.

Yes, this 72-year-old retired middle school teacher and principal from DeKalb may seem ordinary, but he is far from it. For a so-called “retiree,” Kuropas is still heavily active in politics – Ukrainian-American politics to be specific.

In 2003 he helped organize a postcard campaign petitioning the Pulitzer Prize Board to rescind Walter Duranty’s award. Duranty, a New York Times reporter, wrote several articles about the Soviet Union during the 1930s. Some Ukrainian and American historians say Duranty knowingly deceived the American public about the deaths of more than 7 million Ukrainians because of an artificial famine created by the Soviets in 1932.

Kuropas is also an adjunct professor in educational foundations at Northern Illinois University. He has authored two books, “The Ukrainian Americans: Roots and Aspirations” and “The Citadel: The First Hundred Years of the Ukrainian National Association.” And for the past 23 years, he has written a bi-weekly column in the Ukrainian Weekly.

Today Kuropas speaks at local Republican events and Ukrainian banquets. He says he is often asked to address why the Ukrainian community seems to be dwindling.

“If our [the Ukrainians] whole purpose was to raise a new generation of young Ukrainians so that they will take over our older organizations, its not happening,” he says, referring to how current participation in the community tends to decrease after college. “One reason why is because 90 percent of our youth don’t marry other Ukrainians…we should make all of the non-Ukrainians feel at home in the community. That would keep our children involved.”

Kuropas also says Ukrainians should get over their ethnic snobbery because some Ukrainians leaders’ refusal to open the community to non-members and fund politicians prevents the ethnic group from gaining political clout.

In the past the Ukrainian activist might have been criticized by his community for such remarks but he is now well-respected and admired.

“He is somebody you can get along with it and he’s young at heart,” says New York resident Andrew Bazylevsky, 27, who is an avid reader of Kuropas’ column. “He’s well-read and knows a lot about what’s going right and wrong in the community.”

An unexpected move to the White House

“I see him as an intellect, and I see him competent in so many ways…he was able to do so many things,” Mrs. Kuropas says of her husband.

Indeed Kuropas has accomplished a lot.

Few people, not to mention ethnic Ukrainians, can say they served as an expert on ethnic affairs for President Richard Nixon, President Gerald Ford and former U.S. Sen. Bob Dole.

Kuropas’ bluntness would pay off.

In the early 1970s, Nixon administration member Al Kaupinen approached Kuropas to work for ACTION, an umbrella agency that combined several volunteer agencies including the Peace Corps and VISTA (Volunteers in Service to America).

“He [Kaupinen] says to me, ‘We are forming a new federal agency…and we want to have this agency reflect the flavor of the United States,’” Kuropas recalls. “‘In Chicago we want a white ethnic from Eastern Europe.’ So he says for me to find someone to be the regional director of Chicago.”

But Kuropas couldn’t find anyone. According to him, Chicago area residents who met the requirements for the position did not want to leave their already well-paying jobs. And Kuropas didn’t want the position because he was currently a principal in the Chicago public school system.

“So I call this guy back and he says to me, ‘I knew you couldn’t do it, Kuropas.” he continues. “‘I’m going to tell you something: Either you take the job yourself or you will never ever speak at any Republican function again.’ So I took the job.”

Kuropas served on ACTION from 1972 to 1975. He continued to work as a Chicago principal by travelling to Washington, D.C., on weekends. He developed several programs including Project Senior Ethnic Find. Branches were located in Chicago, Cleveland, Detroit and Gary, Ind. The program made ethnic seniors into VISTA volunteers who were paid $6,000 a year and given a $10,000 life insurance policy.

“I got the idea from the Ukrainian neighborhood,” Kuropas says. “I heard a senior citizen in the old neighborhood had been rummaging in the alley at 1 a.m. and had been beaten up….I found out the guy was living below the poverty level and he was going around looking for food, but he was too proud to ask for welfare assistance.”

In Jan. 1976 Ford appointed him as special assistant for ethnic affairs. For the next year, he worked to improve communication between the White House staff and various ethnic groups. He organized several White House conferences on ethnic relations.

Kuropas also introduced a question referring to a person’s ethnic background in 1980 census. And he helped convince Ford to formally condemn President Franklin Delano Roosevelt’s executive order to incarcerate about 12,000 Japanese-Americans in internment camps during World War I I.

After Ford lost re-election, Kuropas was recruited by Dole in 1977 to organize an ethnic panel for the Helsinki Human Rights Commission – a committee that monitored whether the Soviet Union was honoring the human rights of its citizens. Kuropas essentially was Dole’s advance man in Vienna, where Kuropas organized Ukrainian refugees from the Soviet Union to meet with the senator.

“At the White House I’d get there at 7 a.m. and then go home at around 11 p.m. everyday,” he says. “My two sons were starting to grow up and I was missing them. So I left Washington and found a job as a school principal in DeKalb [retired in 2000].”

But he still managed to keep his foot in the White House door. He played an influential role in President Ronald Reagan’s eventual decision to designate Nov. 4, 1984, as a “Day of Commemoration of the Great Famine in the Ukraine in 1933.”

When a bill for a Ukrainian genocide commission came before the U.S. Senate, Kuropas asked Scott Colon, legislative assistant to former Sen. Charles Percy to convince the Foreign Relations Committee to hold hearings on the bill. At the time the Illinois senator was chairman of the committee.

“Colon called me back and said, ‘There may be one hitch,’” Kuropas says. “The Jews are very sensitive about the famine because they think if we talk to much about it, in someway this is going to have a negative effect on their holocaust.’ So I ask my friend David Roth, who was a member of the American Jewish Committee, to testify.”

But at the committee meeting, Kuropas’ team almost hit a wall.

“There’s a guy from the White House and he says, ‘Ronald Regan’s people are not for this famine commission because if we have this then we’d have to do something for the Armenian Massacre, and then it would just open up a Pandora’s box and the U.S. cannot be involved with all of this,” Kuropas retells. “’We’ve already done something for the Jews – we have a Holocaust Museum and that cost us millions.’”

“…And David to his credit says, ‘Excuse me, I resent that,’” Kuropas describes as he tries to suppress tears. “‘Because what you are saying, sir, is that the lives of 6 million Jews are somehow more important than the lives of 7 million Ukrainians.’ And it shut that guy right up.”

Soon after, a Ukrainian famine commission was established. And Kuropas continued to stay active in Ukrainian-American politics on the local level.

Kuropas wasn’t always comfortable in his ethnic skin. Born in 1932 in Chicago to an immigrant family from Western Ukraine, Kuropas says he initially never felt at home in the Ukrainian community.

“I always had this view of the Ukrainians as being kind of round-lake [self-concerned] type people,” he says. “Everything had to be spoken in Ukrainian…and they’re not very progressive… I just didn’t fit in.”

So Kuropas focused more on “living up” his college years at Loyola University Chicago.

“I met somebody the day I was registering in my freshman year; he and I took every single class together for four years,” Kuropas says. “We would miss some of our classes because we were playing pinochle, which is a dumbed down version of bridge, in the student lounge for money. So, I ended up with like a C + average.”

Kuropas was denied admission into Loyola’s graduate school. He finally “got his act together” at Roosevelt University where he received master’s degree in psychology, according to Kuropas. But he was again rejected by Loyola, this time for the Ph.D. educational foundations program.

“I was so depressed, so I started to teach,” he says.

Kuropas worked for the Chicago Board of Education from 1956 to1971. He eventually received a Ph.D. in educational foundations from the University of Chicago in 1974.
During his search for a university that would accept him, Kuropas says he gradually embraced the Ukrainian community. His view of Ukrainians changed when he was 24 years old. He attended a convention of the Ukrainian Youth League of North America in Detroit.

“At the banquet, I saw Ukrainians for the first time in white tuxedos,” he says. “I thought, ‘Whoa, they’re just like Americans. This is my kind of organization.’”

Kuropas soon formed several of his own Ukrainian youth organizations. He says many of them “faded away” because of hostility from more traditional Ukrainian leaders.
Kuropas’ Ukrainian Youth Council of Chicago, tried to unite members of PLAST (Ukrainian Scouting Organization) and CYM (Ukrainian American Youth Association), two youth groups known for their rivalry.

But some of the leaders of PLAST and CYM didn’t approve of their members intermingling with each other, according to Kuropas. Parents were told to pull their children out of the council.

Some prominent Ukrainian-Americans also disapproved of Kuropas’ groups not requiring members to speak in Ukrainian.

“Dimitro Andrievsky [a prominent Ukrainian community leader during the 1970s] criticized MYN (Young Ukrainian Nationalists) in the Ukrainian Weekly [ethnic newspaper] because our members spoke in English,” Kuropas says. “I responded and said, ‘He may be a big hero in Europe, but here in the United States he should know what the circumstances are before he starts making judgments.’ Nobody enjoyed that all.”

The headstrong Kuropas defended his retaliation.

“My dad said, ‘What are you doing…he’s a big wheel and you insulted him,’” he says, mimicking his father in Ukrainian. “And I said, ‘No, he insulted me.’”

But even with these initial failures, Kuropas remained involved in the community. And he successfully combined his passion for Ukrainians with his love of politics.