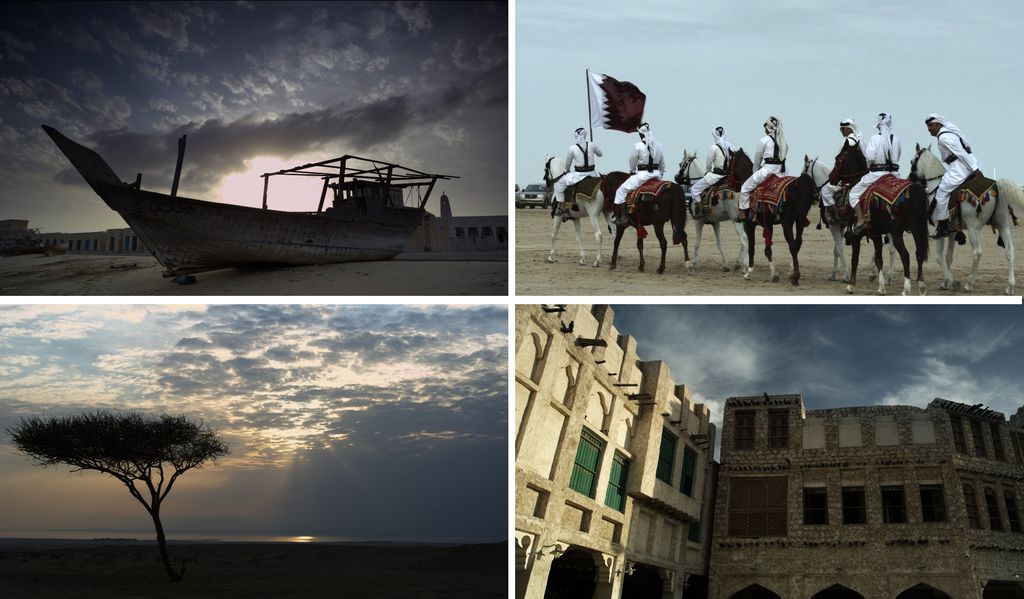 This article appeared in the April 2012 issue of Qatar Happening magazine. Download the PDF. The unedited version appears below.

It’s a nightmare many expatriates have experienced in Doha: you’re sitting at the airport waiting for your flight to board, when you suddenly realize you forgot to pick up a souvenir for your folks. As you dash around Qatar Duty Free, you wonder what will please them the most, a miniature camel or a thobe-wearing figurine. But what you really want to buy is a gift that will leave your family reeling from the magnificence of the tiny exotic peninsula you’ve chosen to call your new home. And that’s when it hits you – there is absolutely nothing you can buy that will do Qatar justice.

That’s what happened to French filmmaker Johan Madarasz when he first visited Qatar. “I tried to find a DVD to bring something about Qatar but I found nothing. There was only one DVD that was really bad, and the big issue is that in France, and I think in England and everywhere, we have documentaries about Qatar on TV and it’s always the same documentary, with the voiceover that says Qatar gas and petrol,” he said. “The question was, if I want to bring something to my mother, she’s not going to sit down and watch a documentary about Qatar during one hour.”

Now she won’t have to. In February, Firefly Pictures, a division of Doha-based Firefly Communications, launched “Qatar Discovery,” an aesthetically breathtaking 70-minute film that explores the grandeur of the country sans narration.

“We decided to try to find a way to show Qatar differently,” Madarasz explained, who co-produced the film with Qatari entrepreneur and Firefly Communications owner Mohamed Jaidah. Directed by Julien Le Goff, “Qatar Discovery” takes viewers on a tour through Qatar’s desert and urban landscapes using only an original music score recorded in collaboration with EMI publishing.

“It’s the best way to show Qatar to people. You make dinner, you put it in the background and it’s perfect. Because you don’t have to sit down with everybody and say ‘watch, watch, watch.’ You sit down and sometimes they’re going to say, ‘it’s in Qatar, really? This green thing or in the desert when you have the cars on the dunes?’ and you’re going to start talking and it’s going to be good. It’s like a social video.”

The film is divided into four main chapters and it covers an array of Qatar life, from dune bashing and camel racing to the country’s mangrove swamps and archaeological sites in the north. A whole section is devoted to modern Doha, which was superlatively shot by the film’s four-man crew with a single state-of-the-art RED One camera, a device that Madarasz said “delivers the highest resolution on the market” and has been used by Hollywood on films such as the “Pirates of the Caribbean” franchise.

But unlike Hollywood productions, “Qatar Discovery” stays true to reality.

“The process of the video was a long time. We went with the camera and we [shot] what we found. So we’re not cheating at all with this DVD, it’s really Qatar. We don’t take an actor to do this or to do that. It’s all real people,” Madarasz explained. “We went everywhere. Sometimes there is no road, we say ‘OK, we go straight and we’re going to see what happens.’”

Along the way, Madarasz fell in love with Qatar and its people. “I love this country, and I was really surprised for the shooting because we went everywhere. Sometimes we go in a farm, we go inside many places, and people are really friendly, really,” he said. “If we go to Al-Shahaniya the camel town, even if you are a tourist you can go inside the farm, and they take you and they are going to want you to drink camel milk, come in the tent, take your tea, sit down, and if you want to stay the night, you can stay the night. They are really friendly, really.”

Madarasz and his partners never appear on camera but they don’t need to. Their adoration for Qatar is evident in the film’s exquisite compositions and meticulous editing. It certainly achieves its aim of turning the “screen into a true work of art, a window into the wonders of Qatar.”

But that is also this reporter’s criticism. The film only focuses on beauty. Missing are shots of the country’s grittier aspects, such as the sand storms that frequently envelope the capital (shown only very briefly during the end credits) or the living conditions of poor migrant labourers. The film also focuses almost too heavily on scenery and seems to glide over the country’s heart and soul: its people, both expats and Qataris. As striking as it is, “Qatar Discovery” leaves me feeling disconnected, as if I am watching a commercial designed to promote tourism to a faraway land and not a documentary that genuinely reflects the experiences of many residents and long-term visitors in Qatar.

The music is also problematic at points. The film starts off strong with evocative Arabian melodies, but it later tries too hard to emphasize the country’s cosmopolitan side with new renditions of famous pop songs from the 1950s and ‘60s, recorded specially for the DVD. Although Qatar has voraciously embraced some aspects of Western modernity, and the film seamlessly intertwines the country’s ancient traditions and neoteric facades, the music threatens to disrupt the film’s visual harmony. Cover songs such as “You Can’t Hurry Love” seem out of place and, frankly, bizarre when played over shots of Qatar’s barren desert interior.

Madarasz said the team chose to include several love songs in English “because there are many love songs in Arabic music. So we tried to keep it this way to get this kind of way of love and everything.” As for the cover songs, he thinks they will help viewers to “chill out and lounge” as they watch the film, and since contemporary recordings of old hits are extremely popular in France, he hopes the DVD will expand music awareness among Qataris.

The film may have incongruous elements; nevertheless, it is a worthwhile purchase at 90 riyals. Residents may watch it wanting more, but you can rest assured that your mother will be stunned.

“Qatar Discovery” is available at Virgin Megastores, Lulu Hypermarket and Qatar Duty Free in the Doha International Airport. A 20-minute version of the film will soon be shown on Qatar Airways flights.