Reflections on President Viktor Yushschenko’s Visit to the U.S. 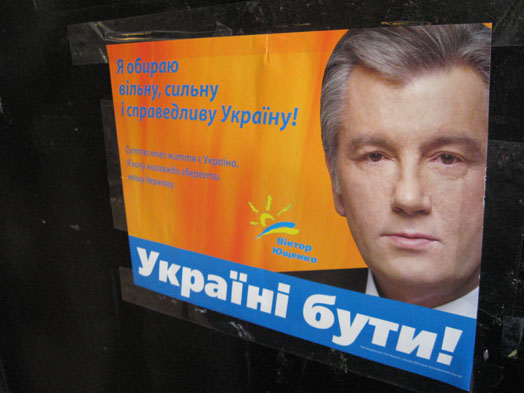 See this story as it originally appeared in the Ukrainian Weekly newspaper. Download the PDF version (story appears on page 8).

My hands were shaking. As my work-study boss drove me to the Palmer House Hilton Hotel in Chicago, my shoulders tensed and I could feel my heart thumping in my chest.

I knew eventually I would cover a “big” story – one that all the Chicago TV stations and newspapers would cover too. That’s what all of us “up-and-coming” journalists at Northwestern University were training to do. But I had no idea that big story would materialize while I was still an undergraduate. Nor did I ever imagine the story would include me filming a head of state’s speech – not just any head of state, but one I had a personal connection to: Viktor Yushchenko.

Of course, I had never met the man in my life. But I felt he would be the type of guy to share a plate of pyrohy with a person just because they were Ukrainian. So as my boss dropped me off in front of the hotel, I took a deep breath and tried to block out the voice inside me saying, “Don’t screw this up!”

Although stressed (I was covering this story for Northwestern’s student newspaper, television station and public relations newsletter), I felt confident carrying my camera equipment and wearing my newly purchased black suit and Nordstrom shoes. And I was proud to be wearing my Ukrainian blouse – although by doing so I probably wasn’t presenting myself as a true unbiased and objective reporter. But I didn’t care. Here was my chance to do something for Ukraine and the Ukrainian American community; this was my opportunity to pop Northwestern’s little bubble and to expose the students to an icon who was not part of the American mystique.

Okay, so maybe I was a bit cocky when I flashed my press pass to the security guard and pretentiously sauntered into the ballroom while the Chicago Ukrainians who actually paid the $25 to get in waited an extra hour before being seated.

And, yes, I relished mingling with reporters from the Associated Press and Reuters, something only a nerd such as myself would find pleasure in.

But networking wasn’t my goal that evening. As far as I was concerned, my purpose in life that night was to give back to the community that raised me.

And even though I had grown up in Parma, Ohio, and barely knew a handful of the Ukrainians in the audience, there was a bond that existed among all of us that night. I felt as if I, too, was a Chicago Ukrainian. I was one of them as I stood up with the rest of the crowd to chant, “Klitschko Champion!” when the boxer walked into the room. And I certainly was one of them when a security guard nearly grabbed my digital camera out of my hand as I pushed my way through the crowd to snap a picture of the overwhelmed world champion.

But it was when President Yushchenko and his wife took the stage that I realized I belonged. As the other members of the press stoically listened to the president’s speech, I cheered with the rest of the crowd, wishing I had brought my orange scarf and mini Ukrainian flag to wave. Tears flooded my face as I watched a video montage of the Orange Revolution, and I yearned to have been in Ukraine when Mr. Yushchenko tore down the country’s own iron curtain. But it was when President Yushchenko said Ukraine was finally free and democratic, that my heart melted in admiration for the man.

Ukraine might have gained its independence officially in 1991, but that wasn’t a complete victory for the Ukrainian people. For more than a decade, our homeland was run by corrupt, Russian-backed puppets who did little for the dignity of Ukraine or its people. It took a man who suffered a rigged election and dioxin poisoning to pull Ukraine out of the mud in which it was drowning.

President Yushchenko was right when he said, “This is the kind of country for which our grandparents and parents sacrificed their lives.” My grandparents and parents certainly answered Ukraine’s call. My dido (grandfather) almost lost his life while fighting in the Galicia Division in World War II. And I suppose it’s rare to find a suburban mom who was willing to protest and be arrested for Valentyn Moroz. Even I did my part when I rallied for Mr. Yushchenko in Chicago and New York.

For three generations my family has fought, protested and rallied for Ukraine’s freedom, and finally that was achieved through President Yushchenko and his administration. Ukraine’s Independence Day does not fall on August 24, 1991, but on January 11.

If only my dido had been alive to see it … how satisfied he would have been to know that all his sacrifices were not in vain.

Needless to say, President Yushchenko’s speech on Monday, April 4, was an inspiring experience for me. And I’m happy to report that – with God’s help – my filming turned out great and my editors were quite pleased with the final product. But most importantly, I went away from the event believing I had just accomplished something worthwhile. As I climb up the journalism ranks in the future, perhaps I’ll get the chance to report on Mr. Yushchenko again. Maybe then he’ll share a plate of pyrohy with me…

Christina Paschyn is a sophomore in the Medill School of Journalism at Northwestern University. Her concentration is in broadcast journalism and sociology. She grew up in Parma, Ohio, and belonged to the Ukrainian American Youth Association (SUM) and the Kashtan School of Ukrainian Dance. She hopes to be a foreign correspondent in the future.