Reinventing Your Life in Doha: The Victoria Scott Story 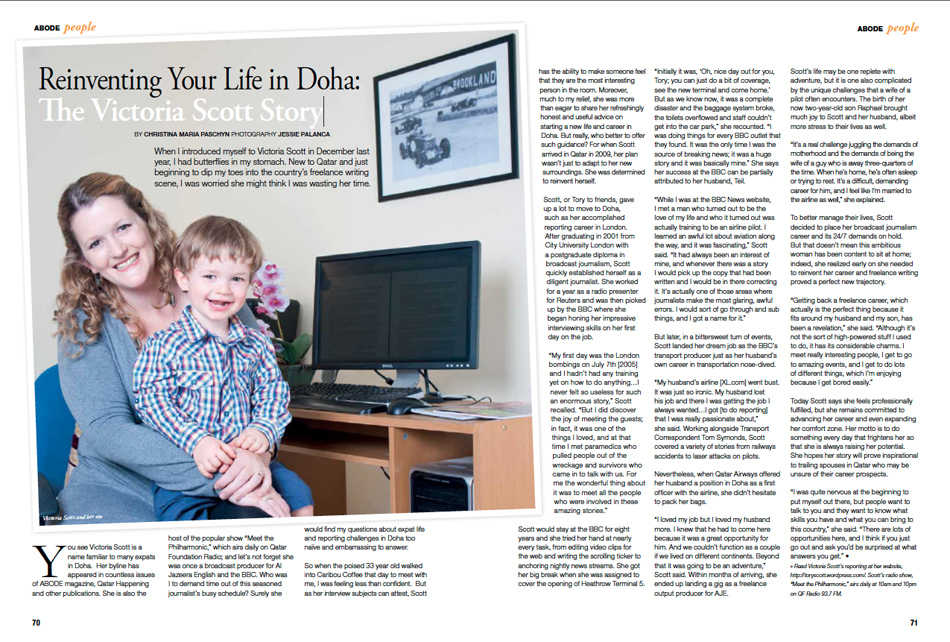 Published in the June 2012 issue of ABODE magazine. Download the PDF version.

When I introduced myself to Victoria Scott in December last year, I had butterflies in my stomach. New to Qatar and just beginning to dip my toes into the country’s freelance writing scene, I was worried she might think I was wasting her time.

You see Victoria Scott is a name familiar to many expats in Doha.  Her byline has appeared in countless issues of ABODE magazine, Qatar Happening and other publications.  She is also the host of the popular show “Meet the Philharmonic,” which airs daily on Qatar Foundation Radio; and let’s not forget she was once a broadcast producer for Al Jazeera English and the BBC.

Who was I to demand time out of this seasoned journalist’s busy schedule? Surely she would find my questions about expat life and reporting challenges in Doha too naïve and embarrassing to answer.

So when the poised 33 year old walked into Caribou Coffee that day to meet with me, I was feeling less than confident.  But as her interview subjects can attest, Scott has the ability to make someone feel that they are the most interesting person in the room. Moreover, much to my relief, she was more than eager to share her refreshingly honest and useful advice on starting a new life and career in Doha. But really, who better to offer such guidance? For when Scott arrived in Qatar in 2009, her plan wasn’t just to adapt to her new surroundings. She was determined to reinvent herself.

Scott, or Tory to friends, gave up a lot to move to Doha, such as her accomplished reporting career in London. After graduating in 2001 from City University London with a postgraduate diploma in broadcast journalism, Scott quickly established herself as a diligent journalist. She worked for a year as a radio presenter for Reuters and was then picked up by the BBC where she began honing her impressive interviewing skills on her first day on the job.

“My first day was the London bombings on July the 7th [2005] and I hadn’t had any training yet on how to do anything…I never felt so useless for such an enormous story,“ Scott recalled. “But I did discover the joy of meeting the guests; in fact, it was one of the things I loved, and at that time I met paramedics who pulled people out of the wreckage and survivors who came in to talk to us. For me the wonderful thing about it was to meet all the people who were involved in these amazing stories.”

Scott would stay at the BBC for eight years and she tried her hand at nearly every task, from editing video clips for the web and writing the scrolling ticker to anchoring nightly news streams. She got her big break when she was assigned to cover the opening of Heathrow Terminal 5.

“Initially it was, ‘Oh, nice day out for you, Tory; you can just do a bit of coverage, see the new terminal and come home.’  But as we know now, it was a complete disaster and the baggage system broke, the toilets overflowed and staff couldn’t get into the car park,” she recounted. “I was doing things for every BBC outlet that they found. It was the only time I was the source of breaking news; it was a huge story and it was basically mine.”

She says her success at the BBC can be partially attributed to her husband Teil.

“While I was at the BBC News website, I met a man who turned out to be the love of my life and who it turned out was actually training to be an airline pilot. I learned an awful lot about aviation along the way, and it was fascinating,” Scott said. “It had always been an interest of mine, and whenever there was a story I would pick up the copy that had been written and I would be in there correcting it. It’s actually one of those areas where journalists make the most glaring, awful errors. I would sort of go through and sub things, and I got a name for it.”

But later, in a bittersweet turn of events, Scott landed her dream job as the BBC’s transport producer just as her husband’s own career in transportation nose-dived.

“My husband’s airline [XL.com] went bust. It was just so ironic. My husband lost his job and there I was getting the job I always wanted…I got {to do reporting] that I was really passionate about,” she said. Working alongside Transport Correspondent Tom Symonds, Scott covered a variety of stories from railways accidents to laser attacks on pilots.

Nevertheless, when Qatar Airways offered her husband a position in Doha as a first officer with the airline, she didn’t hesitate to pack her bags.

“I loved my job but I loved my husband more. I knew that he had to come here because it was a great opportunity for him. And we couldn’t function as a couple if we lived on different continents. Beyond that it was going to be an adventure,” Scott said. Within months of arriving, she ended up landing a gig as a freelance output producer for AJE.

Scott’s life may be one replete with adventure, but it is one also complicated by the unique challenges that a wife of a pilot often encounters. The birth of her now two-year-old son Raphael brought much joy to Scott and her husband, albeit more stress to their lives as well.

“It’s a real challenge juggling the demands of motherhood and the demands of being the wife of a guy who is away three-quarters of the time. When he’s home, he’s often asleep or trying to rest. It’s a difficult, demanding career for him, and I feel like I’m married to the airline as well,” she explained.

To better manage their lives, Scott decided to place her broadcast journalism career and its 24/7 demands on hold.  But that doesn’t mean this ambitious woman has been content to sit at home; indeed, she realized early on she needed to reinvent her career and freelance writing proved a perfect new trajectory.

“Getting back a freelance career, which actually is the perfect thing because it fits around my husband and my son, has been a revelation,” she said. “Although it’s not the sort of high-powered stuff I used to do, it has its considerable charms. I meet really interesting people, I get to go to amazing events, and I get to do lots of different things, which I’m enjoying because I get bored easily”

Today Scott says she feels professionally fulfilled, but she remains committed to advancing her career and even expanding her comfort zone. Her motto is to do something everyday that frightens her so that she is always raising her potential. She hopes her story will prove inspirational to trailing spouses in Qatar who may be unsure of their career prospects.

“I was quite nervous at the beginning to put myself out there, but people want to talk to you and they want to know what skills you have and what you can bring to this country,” she said. “There are lots of opportunities here, and I think if you just go out and ask you’d be surprised at what answers you get.”