The Art of Conducting 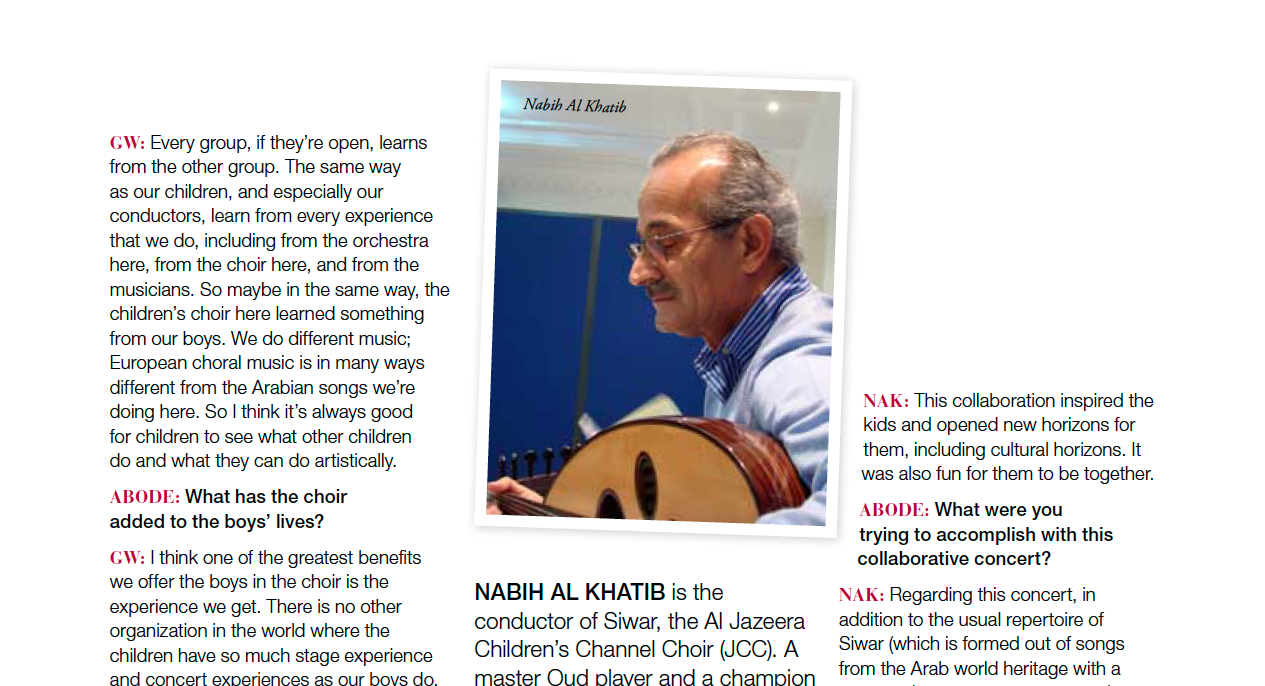 Gerald Wirth is the conductor and artistic director of the Vienna Boys’ Choir, one of Europe’s premiere children’s vocal ensembles. In January, the group travelled to Qatar to perform a New Year’s concert with the Qatar Philharmonic Orchestra and a special recital with the Al Jazeera Children’s Channel Choir. Wirth, himself a former child member of the choir, explains how the group transforms the lives of its young stars and expands audiences’ horizons.

What was your favorite moment performing in Qatar?

“It’s very good for the boys to perform with a big orchestra, which they do quite frequently in Vienna with the Vienna Philharmonic Orchestra, but also on tour. So it’s a special thing. The orchestra here is very nice and interested in Viennese music so it’s a lot of fun to work with them, and they seem to enjoy also the singing of the boys, which is great! And to perform together with the local children’s choir is a special thing because we have now done Arabian songs, like the two we did with them together, so it’s an interesting endeavor.”

“…And, of course, it was fun for the boys to sit on a camel and run around the beach!”

Do you think the Vienna Boys’ Choir has brought something to the Doha community?

“Well, of course we believe that, otherwise we wouldn’t tour! We bring our music, we bring our art form, and we offer that to the interests of the audience.”

“What inspires me are the music making itself, and the music, especially the different compositions. We have so many wonderful composers, not only in Austria, but also all over the world. It’s always inspiring to work with that kind of music, and to teach the boys in a way that they are not aware of learning, and to see them developing from a non-experienced singer to a soloist of a high caliber.”

How has the choir changed since you were a young member?

Well, the choir is more than 500 years old, so when I was boy and now is just a little portion of the choir’s history. The big things like the daily training, the singing, and the repertoire to some extent have been very similar since the time that I was a boy. Nowadays, which is probably because of my personal interest, we do more international music; we do more collaboration with international musicians of other cultures.

What has the group brought to the Al Jazeera Children’s Channel Choir?

“Every group, if they’re open, learns from the other group. Same way as our children, and especially our conductors, learn from every experience that we do, including from the orchestra here, from the choir here, and from the musicians. So maybe in the same way, the children’s choir here learned something from our boys. We do different music; European choral music is in many ways different from the Arabian songs we’re doing here. So I think it’s always good for children to see what other children do and what they can do artistically.”

What has the choir added to the boys’ lives?

“I think one of the greatest benefits we offer the boys in the choir is the experience we get. There is no other organization in the world where the children have so much stage experience and concert experiences as our boys do. Our boys have about 80-90 performances every season – and that’s not singing in a little chamber. [I mean] big concert halls, like the Carnegie Hall, the Musikverein in Vienna, the Sydney Opera House or like the opera house here. Just a couple of weeks ago, we sang at the New Year’s concert in Vienna and things like that happen all the time, which is nice for the children.  It gives them a lot of musical experience, but also the experience of openness in the world. Just by meeting people in Qatar, for example, and just by seeing how people are dressed, how people walk around – it’s something that keeps their minds open.”

What is the Vienna Boys’ Choir planning next?

“We’re in the planning stage with North American Indians (Native Americans) to combine their traditional music and dance with the mid-European tradition.”

What message do you hope to leave with the people of Qatar?

“I hope the people of Qatar enjoyed [our concerts] and our type of art form. We were very happy to be here and we are very happy to take some of the music home with us for future use and future projects. And I hope that we will be back in the not too distant future.”

Nabih Al Khatib is the conductor of Siwar, the Al Jazeera Children’s Channel (JCC) Choir. A master Oud player and a champion of traditional Arabic music, this accomplished Lebanese composer and conductor is transforming Qatar’s musical landscape one child at a time. Siwar, which means bracelet in Arabic, is composed of Qatari and Arab children ages nine to 16. The choir was established by the JCC to help the country’s many talented youngsters discover and explore the rich musical heritage and diverse repertoire of the Arab world. In January, Siwar had the opportunity to perform with the Vienna Boys’ Choir. Al Khatib reflects on the experience.

What is the significance of Siwar’s collaboration with the Vienna Boys’ Choir?

How did it benefit Siwar’s young talent?

“This collaboration inspired the kids and opened new horizons for them, including cultural horizons. It was also fun for them to be together.”

What were you trying to accomplish with this collaborative concert?

“Regarding this concert, in addition to the usual repertoire of Siwar (which is formed out of songs from the Arab world heritage with a new music arrangement prepared specially for Siwar), we wanted to give something new, something innovative. In a joint effort with Mr. Gerald Wirth, the artistic director of the Vienna Boys’ Choir, we were able to add a special flavor to the concert: two traditional Arabic songs for which the Vienna Boys sang in Arabic along with the Siwar children. This wasn’t easy for the Vienna Boys, who don’t speak Arabic, but they did it very well. And Siwar children had the opportunity to learn and sing one Austrian folk song with the Vienna Boys.  It was an innovative experience and the children enjoyed it. I think our audience appreciated this.”

What other important lessons have you taught the children in Siwar?

Before we started rehearsing every day, I explained to the children the importance of the music and how music can affect their lives, etc.  So not only do we teach them how to sing, we explain everything about music.

How do you hope the Doha community will react to future concerts?

“We hope more people will participate in our choir and come and hear our music. It would be nice for their children to have this experience as well [by being in the choir].”