The Challenges of Launching a Startup in Doha: A Chat with the CNA-Q Entrepreneurship Centre 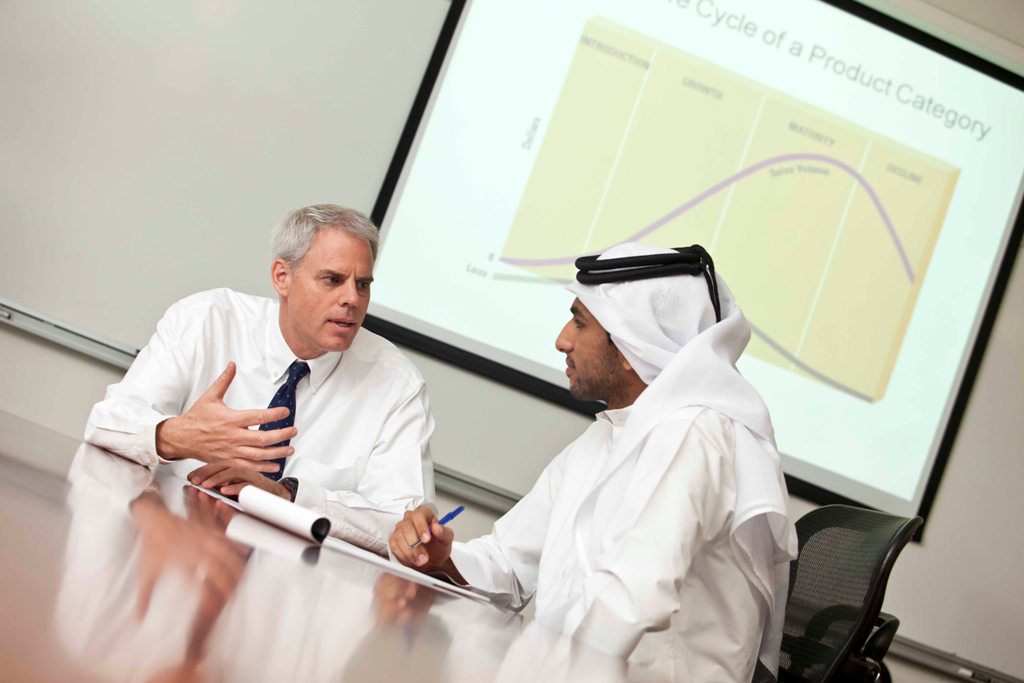 Entrepreneurs are hard to come by in Qatar; small and medium-size enterprises make up only 15% of the economy and only about 2% of Qataris manage their own businesses, according to the Qatar National Development Strategy 2011-2016.

Enter the Canadian Entrepreneurship Centre at the College of the North Atlantic-Qatar (CNA-Q).  Founded in 2010 as part of the Qatar National Vision 2030 plan to diversify the economy, the center mentors and provides entrepreneurship training to students at the college’s campus branch in Doha, run by two former business and financing consultants Curtis Avery and Peter Moore.

Their goal is to encourage more students to consider launching a startup as a viable career path. I recently met up with Avery and Moore to find out what prevents locals from launching their own businesses.

Curtis Avery: For Qataris, I’d say that the employment opportunities are so well-paid that they don’t want to risk $100,000 when they can have a fairly decent job for $100,000. So there are not those kind of need-based entrepreneurs. Even from the expat standpoint, there’s not as much need-based entrepreneurship because the expats who come here already have a job. When they don’t have a job anymore, they have to go home because there’s no visa for them to stay.

But I think that there are a lot of Qataris who are doing it for other reasons. Sometimes it’s a passion, or a hobby or something that they are very interested in. And I think a lot of them are pursuing those types of things.

As for Qatari women, it’s a path to independence. They have a lot of opportunity, like the men do in business, but I don’t think they have as easy a path as men do in terms of getting to the top and being leaders; they definitely do have those opportunities but they may come slower than they do for men. So going out and doing their own businesses is a means of really being in control and being independent.

Paschyn: What are some of the other challenges in launching a small or medium sized enterprise in Doha?

Peter Moore: In Canada, if you want to start a business you just open up your garage or basement and carve out a little room for yourself and get going. But here you have to have a storefront and you have to have an office. So you have to go out and rent something before you even go into business – it’s not legal to run it out of your home.

Another thing is you have to put up 200,000 QAR (US $54,933) as a deposit in the bank before you can even go and register a company. These things are based on the culture, with the stigma towards bankruptcy and not paying your bills, which are very legitimate. But if you’re talking about evolving to become a world-class state – a country that can compete internally and externally like any free market system – then some of these things have to be addressed in certain ways or you’re just not going to get the foundation.

Paschyn: All businesses in Qatar must have a Qatari partner that owns at least 51% of the company. How does that impact the entrepreneurship ecosystem?

Moore: The country is looking for Qataris to be involved in entrepreneurship. But the reality is that out of a 100,000 people, you might end up with 100 entrepreneurs. And the statistic we used to kick around back in Canada is that within five years of all start-ups, 85% percent of them go out of business. So if you’re talking about a Qatari demographic that’s only in the small thousands [about 250,000 Qatari citizens] and if you just hold the percentages, you’re talking about only tens of people becoming successful entrepreneurs. That isn’t going to develop a diversified economy.

The reality is something has to be put in place that allows the concept of a free enterprise system in terms of people willing to take the risk to get into business. So maybe that means allowing a company to grow to a certain size and then they get a Qatari influence, or some type of a formula that way.

Avery: For the expats the 51% requirement is a deterrent; you’re basically giving up half the ownership to the Qatari partner that you have. If you are an employed expat wanting to start a business on the side, you have a sponsor and legally you’re not supposed to be starting a business, because under the sponsorship you’re only supposed to be doing that job that you got hired for. So there’s a huge underground economy here.

There are all kinds of people who are hairdressers and massage therapists and caterers that are doing it out of their home illegally. And they have the expat community that they serve and it doesn’t make any sense for them to go legitimate. It prevents them from being large because they can’t advertise, but a lot of them, I guess, make enough.

Paschyn: The center mentors students as well as professional clients in Doha. What sort of advice do you give to them?

Avery: Number one, do something you’re passionate about. Surround yourself with a good team. Do your research. Be persistent but recognize when it’s time to get out or drop it. And take advantage of all the entrepreneurial support that’s in the country, like CNA-Q and other academic institutions, Enterprise Qatar, Silatech, Bedaya, ictQatar, Qatar Development Bank, Social Development Center and the Roudha Center.

Also, a lot of what investors are investing in is the people; so develop your skills, knowledge and experience. You need to convince investors that you and your team can actually make this happen. You can have a great idea and you can articulate why it’s needed in the market place, but if you can’t convince people that you’re competent – that you and your team have the ability to actually pull this thing off – they’re not going to want to invest in you, because they really are investing in you.