This Movie is a Beautiful Call to Anger, Action 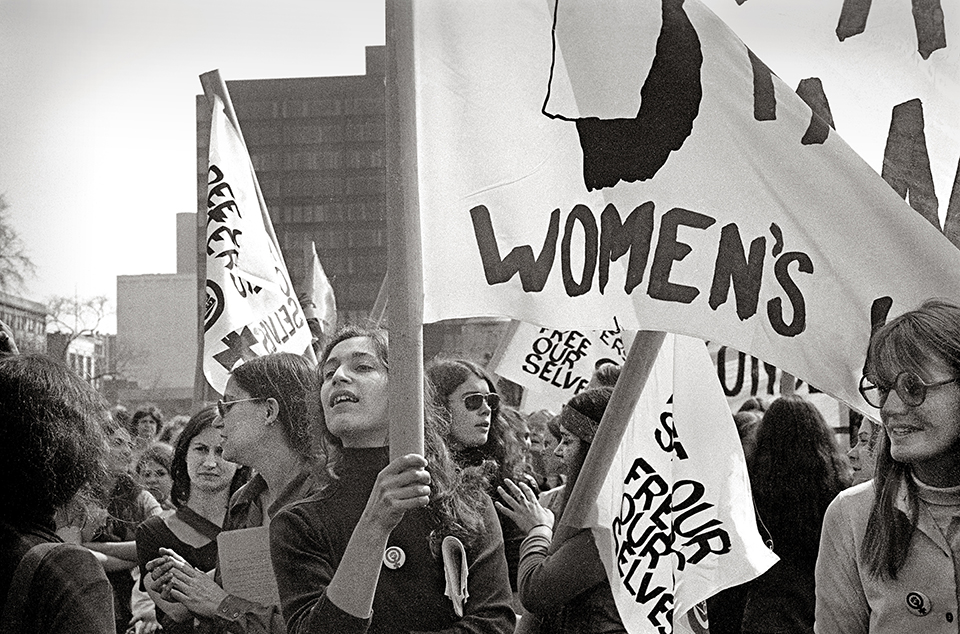 DOHA, Qatar (WOMENSENEWS)– Second-wave feminists are finally getting their cinematic due in the chokingly emotional, comprehensive documentary “She’s Beautiful When She’s Angry.”

Betty Friedan, Jacqui Ceballos, Susan Griffin, Frances Beal, Linda Burnham, Ellen Shumsky and so many more. They added up to a mighty “tsunami,” as Roxanne Dunbar-Ortiz once so perfectly described, crashing onto America’s patriarchal shores. And this movie lets their force crash right over you.

The documentary comes out today in New York City at the Landmark Sunshine Cinema and then opens on Dec. 12 in Los Angeles at the Landmark Nuart Theatre. My advice: GO. SEE. IT.

Go see it in New York, then see it in LA, then buy a copy when it comes out on DVD. Take your friends, sisters, mothers, fathers, daughters and sons. Tell everyone you know to see this incredible film. Though I am based in Qatar, I was lucky enough to get an advanced copy of it. But believe me, if I were in the United States, I would gladly surrender the money to see it again.

Directed by Mary Dore and co-produced and edited by Nancy Kennedy, the movie chronicles the risks these activists took to make the United States a better place for all women – to make gender equality our birthright.

The film takes us through the evolution of the second-wave feminist crusade, from its emergence out of the civil rights and New Left movements to how these vanguards tackled many controversial issues, including reproductive rights, workplace discrimination, universal day care and rape. It features an array of insightful and moving interviews with feminist activists who have left an indelible mark on society.

It’s hard not to get emotional as the film progresses and the victories of these courageous women shine through.

But the filmmakers have not produced a hagiography. There are missteps and flaws. We see the National Organization for Women’s initial distrust of lesbian feminists, for example. We see failed utopian ideals. Refreshingly, the interviewees don’t shy away from acknowledging the mistakes they made along the way in their pursuit of a total social revolution.

“She’s Beautiful When She’s Angry” also highlights the important efforts of both African American and Latina feminist activists during the ’60s and ’70s. These include their pushback against sexist cultural norms, such as machismo and the idea that a black woman’s right to an abortion and contraception was somehow an act of genocide against her community (a charge still hurled by anti-feminists and conservatives today).

The film also acknowledges how the more prominent white, middle-class activism of the second-wave failed to encompass enough the concerns of women of color, and, as a result, why many black female activists were hesitant to identify with the term feminist.

By tackling such an important historical and indubitably broad topic, I’m sure it was a challenge for the filmmakers not to overwhelm viewers with too much information. Yet I wish they had delved even deeper into these issues of race and women of color’s impact on the movement.

Nevertheless, “She’s Beautiful When She’s Angry” provides an excellent overview of second-wave feminism. It’s as thorough as an introductory gender studies textbook but also as captivating as any feature-length, theatrical documentary should be. You don’t have to worry about talking heads droning you to sleep. The film is pregnant with action, enthralling archival footage, performance readings and other compelling storytelling.

Footage of thousands of women marching in the 1970 Women’s Strike for Equality, organized by Friedan, was probably the most moving part for me. And what modern-day feminist would not feel utter pride at the sight of our predecessors unrolling a “Women of the World Unite!” banner under the Statue of Liberty?

The film made me nostalgic for an era that was never mine, but from which I have benefited greatly. And that is why I am saying every woman – and man, for that matter – should see this film. This is our communal history. We are a better society and country because of the work of these activists.

Because of these women, I can just be me.  They were my saviors even before I was born.

Above all, the film is a call to action. As its title proclaims, women are beautiful when they are angry. Our righteous anger at inequality, sexism, misogyny, patriarchy, racism and homophobia is more than just – it can change the world. And it’s time for us to get angry again. Though it achieved so much, not all of the second-wave’s victories have been set in stone. Women’s rights are under assault.

We still live in a country where women do not receive equal pay for equal work, if they are not altogether pushed out of the workforce by sexism and the mommy-stigma. Despite feminists’ push for universal day care, we are still being denied what should be a fundamental human right. Abortion access is being curtailed across the United States and pregnant women still face discrimination on the job. We even live in a country where state officials pass laws that ultimately allow reproductive health facts in student biology textbooks to be censored.

As the film intimates, it’s time for us third- and fourth-wave feminists to take to the streets, too. Sure, our generation is active and even groundbreaking. Our use of social media and blogging to instigate change is a force to be reckoned with, as is our use of sarcasm and humor to challenge gender stereotypes and misogyny.

But despite my own online presence, I feel at times disconnected from other feminists my age in the United States, not sure of how we can rally together to create a new social revolution. I want to see, feel and be part of a substantial mass of women coming together to demand change. I want that physical contact, those person-to-person enlightening, intimate moments. Where are our in-the-flesh consciousness-raising sessions? Why aren’t we storming the streets of D.C. in a women’s strike or unfurling women’s liberation banners over national monuments?  I’m not so sure my generation will have such memorable events to inspire us if we keep our activism predominantly online.

But our differing methodologies aside, as this earlier era teaches, we should not be afraid to get mad, to vocally and collectively demand the rights that all women are entitled. After all, what’s the worse that can happen – getting called feminazis or dykes? Been there, done that.

Christina M. Paschyn is a university lecturer and freelance journalist covering gender issues as well as Eurasian and Middle Eastern affairs. She blogs at http://www.femitup.com/. Visit her website: https://christinapaschyn.com/.