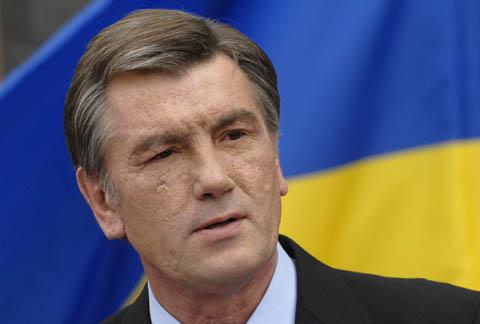 See this story as it originally appeared at the Daily Northwestern. This article also appeared on the Northwestern University News Center.

Orange was the color on Monday evening when more than 1,000 Chicago Ukrainians wearing orange ties, scarves and buttons swarmed the Palmer House Hilton Hotel to catch a glimpse of Ukrainian President Viktor Yushchenko.

Yushchenko, whose appearance was co-sponsored by the Chicago Council on Foreign Relations and Northwestern, spoke about how grateful he was to the Ukrainian-Americans who supported his candidacy and rallied for him both in Ukraine and in the United States. Orange was Yushchenko’s campaign color.

“The nation has risen from their knees not only by being driven by the desire to see our country free and democratic,” he said. “We also rose from our knees because you were by us.”

The Ukrainian president and his wife were escorted by a large entourage that included Ukrainian boxer Vitali Klitschko, the current world champion, whose ovation equalled Yuschenko’s.

Chicago Mayor Richard Daley introduced Yuschenko and praised him for bringing democracy to Ukraine. He also said he looks forward to bringing a delegation of Chicago business leaders to Ukraine.

A video montage of last year’s “Orange Revolution,” followed, evoking tears from some members of the crowd. Yushchenko, who ran against former Prime Minister Viktor Yanukovych, was elected in December after Ukraine’s Supreme Court ruled that an earlier round of the presidential election was tainted by fraud. Yuschenko also survived dioxin poisoning that disfigured his face.

Yushchenko, who spoke with the assistance of a translator, was interrupted several times by cheers from audience members waving mini Ukrainian flags.

He said he intends to reform Ukraine’s political and business system, and he promised to cleanse the Ukrainian government of the corruption that defined it during the 1990s.

“We have given birth to a new nation where human rights and dignity are respected and the government is on the lookout for the protection of human rights and its citizens,” Yushchenko said. “This is the kind of country struggling for which our grandparents and parents sacrificed their lives.”

The Ukrainian leader also commended Ukrainian-Americans for maintaining their cultural heritage even though they are “distant from the homeland.”

He described being deeply touched when he saw a placard while in the country of Ukraine that read, “Yushchenko, Tak (Yes), Chicago.”

During a question-and-answer period, Yushchenko said the strategic objective of Ukraine is to integrate into the European Union. His administration is working on gaining membership in the World Trade Organization and liberalizing visa policies with the EU and the United States, Yushchenko said.

Anya Maziak, a Chicago resident and Ukrainian-American, said she attended the event because Yushchenko was the leader her and other Ukrainians hoped for after the Communist regime fell.

“Yushchenko represents so much to our culture and to the (Ukrainian) diaspora, and he was definitely someone we all rallied around,” she said.