What Net Neutrality Means for Journalists 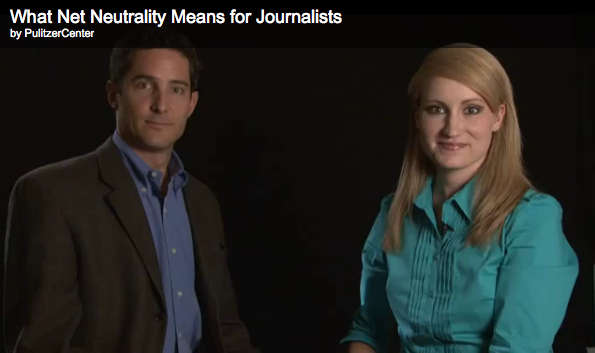 Published by the Pulitzer Center.

Senior Policy Counsel David Sohn of the Center for Democracy and Technology discusses how the recent court ruling on net neutrality could affect journalists.

Net Neutrality – a little understood term for a policy issue that could have broad implications not only for the millions of Americans who log on to the Internet everyday, but also for the hundreds of journalists who depend on the web to access breaking news, gather independent information, file their stories and upload/download videos.

Net neutrality basically means open access to the Internet. In other words, the ability to visit any Web site or online content at virtually the same level of speed and accessibility.

It is a principle that the Federal Communications Commission has championed in recent years by insisting that cable and telecommunications providers, like Verizon and Comcast, not discriminate against certain sites by limiting service for users who visit them. But the FCC’s attempt at Internet regulation was dealt a hard blow on Tuesday, April 6 by a Washington, D.C. federal appeals court.

The facts are these: In 2008, the FCC cracked down on Comcast for slowing and blocking customer access to BitTorrent, a popular file-sharing site that the broadband provider claimed was congesting network traffic. Comcast yielded but later filed suit, arguing that the independent government agency does not have the authority to prohibit or punish Comcast for its network management practices. The court ruled in Comcast’s favor, which has prompted multiple outcries both denouncing and praising the decision.

Proponents of net neutrality insist that the ruling threatens the open and free nature of the Internet as we know it, allowing network providers to act as virtual “content gatekeepers” for the web and inhibiting innovation and competition among platform developers. But opponents claim it is regulation that will curtail improvements on web communication technologies. Moreover, they insist that the broadband providers will know better than to block or slow down access to certain content on the web – unless they are looking forward to a public revolt.

What does all this mean for the web-dependent journalist let alone for the average web user? In the video above, David Sohn of the Center for Democracy and Technology, a non-profit civil liberties group “working to keep the internet open, innovative and free,” explains the possible repercussions of the court ruling.