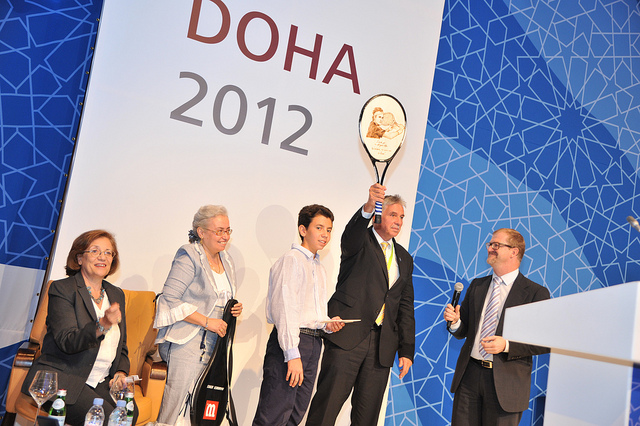 This article was published on the United Nations Universal Postal Union website.

12.10.2012 – Marios Chatzidimou, the gold-medal winner of the UPU 2012 International Letter-Writing Competition for Young People, was honoured at an awards ceremony during the 25th Universal Postal Congress in Doha, Qatar.

With the London Olympics in mind, this year’s theme asked young people up to age 15 to write a letter to an athlete or sports figure that they admire and to describe what the Olympic Games means to them. Competition judges unanimously chose Chatzidimou’s submission – a letter to tennis champion Roger Federer – as the best submission.

“The jury complemented the simple and creative writing style of Marios, saying that the composition was original, very personal and stylistically creative,” said Rhéal LeBlanc, UPU communication programme manager, when introducing Chatzidimou during the ceremony.

Chatzidimou, 14, hails from northern Greece where he lives with his parents and four brothers. In his winning letter, the avid tennis player and aspiring historian highlighted his homeland’s ancient role in setting “the foundations of modern sports”, while praising Federer for his skill and sportsmanship.

Chatzidimou was accompanied at the ceremony by his mother and flown to Doha courtesy of Qatar Airways. As a special surprise, he was presented with a personal letter from Federer by Marc Furrer, head of the Swiss federal communications commission.

Federer encouraged Marios to keep on writing. “With the popularity of electronic communications today, I welcome the UPU’s initiative to foster youngsters’ letter writing skills, and I encourage the UPU to go ahead with this competition, which gives youngsters the opportunity to voice their opinions through letters about the state of the world and other positive events,” Federer added.

Chatzidimou had his own surprise for the sports legend as well; his mother presented a tennis racket featuring a portrait of Federer on the strings that was wood burned by Chatzidimou himself. “It’s the first tennis racket of my family,” Chatzidimou explained. “It’s my favourite racket, I give it to my beloved athlete.” The racket will be delivered to Federer by Furrer.

The Greek ambassador to Qatar, Eleni Zormpala, concluded the ceremony by highlighting the significant nature of Chatzidimou’s competition victory. “This is the first time Greece has won the gold medal,” Zormpala said. “We all have been very proud about this given that the Olympic spirit as well as the spirit of noble competition are closely linked to Greece.”

Valentine Chimba of Kenya won silver in this year’s competition, and Alyona Kuchinskaya of Ukraine and Chelsea Gabriella Ellise Mangarro of Trinidad and Tobago both won bronze. They were feted in ceremonies in their respective countries.

Launched in 1971, the UPU International Letter-Writing Competition for Young People’s raises awareness about the crucial role that postal services play in societies and fosters composition skills and letter-writing enjoyment among the world’s youth. Each year the UPU chooses a theme and the competition is then organized in member countries by their national Posts.

To mark the United Nations’ International Decade for Action “Water for Life” 2005-2015, the 2013 competition will ask young people to write a letter explaining why water is a precious resource.